Who is Ryan Fitzpatrick?

Ryan Fitzpatrick is an American football quarterback who currently plays for the Tampa Bay Buccaneers of the National Football League.

He signed with Tampa Bay Buccaneers in 2017 on a one year deal. On March 9, 2018, he signed a one-year contract extension with the Buccaneers.

In 2004, he was named the Ivy League player of the year as he collected 1,986 yards with 13 touchdowns and 6 interceptions. He also led his Harvard College to 10-0 record helping them to win the Ivy League Championship.

In 2008 NFL, he ranked third in rushing yards among quarterbacks, finishing behind Tyler Thigpen and David Garrard. 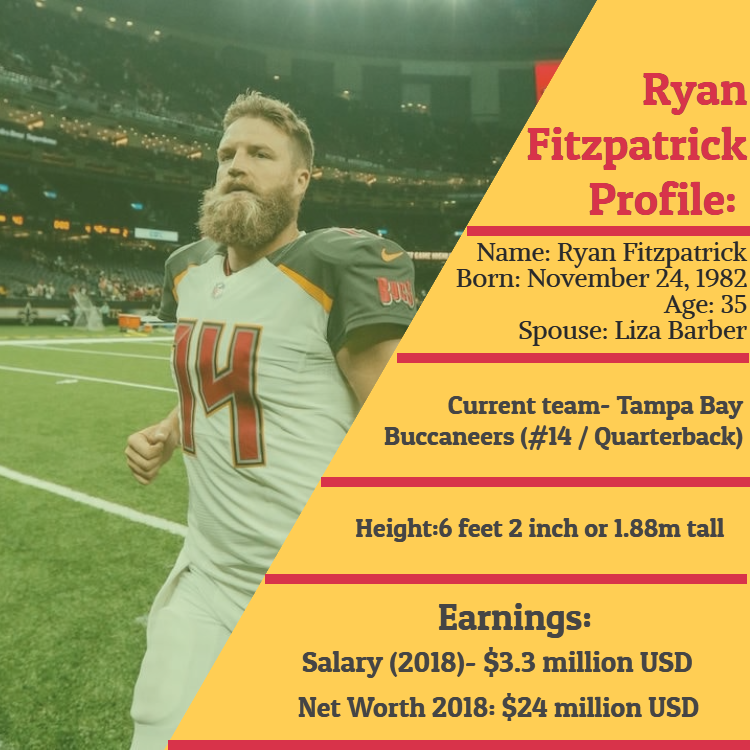 His height compared to other players:

Ryan Fitzpatrick Earnings and Net Worth

According to Richest, Ryan Fitzpatrick is currently worth over $24 million

“It’s not really a surprise. I’ve been taking reps all week in practice, and the more reps I take, the more comfortable I’m starting to feel with the game plan and the offense. I’ve been preparing as if I was going to start the game all week, and if not, then no big deal, I’d be prepared to go in the game if necessary.”- Fitzpatrick

“Going in and not being the starter, you kind of get thrown into the situation so you don’t have too much time to think about it, … Once I got that first ball out of my hands, I was fine.”-Fitzpatrick