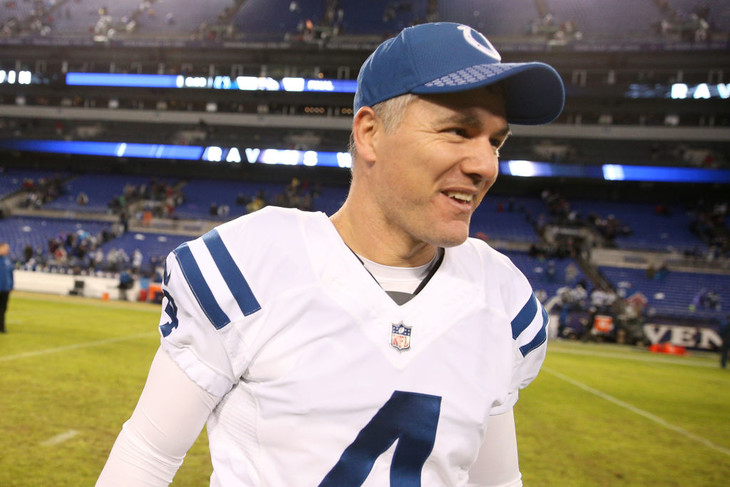 Who is Adam Vinatieri?

Adam Vinatieri is an American football placekicker who currently plays for the Indianapolis Colts of the National Football League. He is considered as one of the best placekickers in the league.

Adam was born on December 28, 1972, in Yankton, South Dakota to Judy M. and Paul Vinatieri. He younger brother Beau is also a football player who played at Black Hills State University. Adam attended Central High School in Rapid City where he excelled in football, wrestling, basketball, soccer, and track. He earned first-team All-State honors as a senior in football.

He then enrolled in the United States Military Academy at West Point but decided to return home and got enrolled in South Dakota State University. He finished his college career as the University’s all-time leading scorer with 185 career points as well as being awarded first-team-all-conference honors numerous times.

In 1996, Vinatieri was signed by New England Patriots as an undrafted free agent to be a placekicker. His first Super Bowl appearance was in 1996 rookie season, where he played with Patriots in the 35-21 loss to Green Bay Packers in Super Bowl XXXI.

With Patriots, Vinatieri has played four Super Bowls and has won in 2001, 2003 and 2004. He played 10 seasons with Patriots and left the team as Patriot’s all-time leading scorer with 1,156 points. The Patriots have not re-issued Vinatieri’s No. 4 since he left the team.

On March 22, 2006, Adam signed with Indianapolis Colts in a five-year contract receiving $3.5 million signing bonus. In his first season with the Colts, his team defeated the Chicago Bears by 29-17. Throughout his career, he is 4 times Super Bowl Champion, 3 times Pro Bowl Champion and 6 times AFC Champion. He was also selected in NFL 200s All-Decade Team.

Adam and his wife Valerie married in 2001. The family resides in Carmel, Indiana along with their three children.

Adam Vinatieri Net Worth, Salary and Earnings (Indianapolis Colts only)

Adam has earned $47,256,999 in his 23 seasons playing for both New England Patriots and Indianapolis Colts. He also earns a significant amount of money through endorsements and sponsorship.

According to Celebrity Net Worth, Adam is worth only $10 million but considering his earnings during his 23 seasons, we can estimate that he is worth way more than $10 million.