Who is Jay Glazer?

Jason Charles shortly known as Jay Glazer is an American sportswriter and NFL insider who works for Fox Sports. He is also active in Mixed Martial arts where he trains NFL players in MMA during the off-season.

Born on December 26, 1969, in New Jersey, United States, Glazer graduated with a degree in mass media from Pace University. He started his career as a reporter writing at the New York Post. He also worked as a writer for ‘Giants Newsweekly’. The newspaper was produced by his longtime friend Dave Klein.

Jay then went on to interact with several NFL players like Jason Sehorn, Aaron Glenn, and Michale Strahan. Alongside working as a reporter for NFL, he also serves as a host for Fox’s coverage of the UFC.  He joined Paramount Network and Bellator MMA to be part of their broadcast team.

In addition to that, he has also given some minor roles in movies like The Longest Yard, The Game Plan, The League and Ballers.

Jay Glazer married Michelle Graci on June 25, 2006. Jay and his wife started dating for a year before their marriage and now the couple is sharing two children including a son named Samuel Glazer.

Michelle Graci was voted a Miss New Jersey USA in 2000. She was represented by the Ford/Robert Black Agency in Scottsdale. She also worked for Rodeo Realty, Inc. 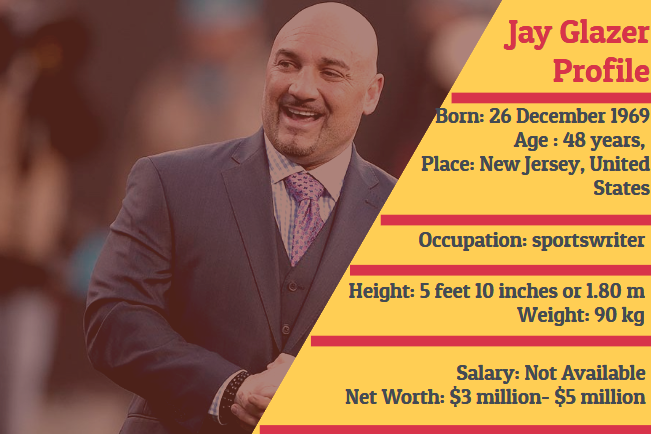 Jay’s net worth is estimated to be in the range of $3.5 million to $5 million. He earned most of his money by reporting and working for Fox Sports. Celebrity Net Worth estimates his net worth to be $5 million