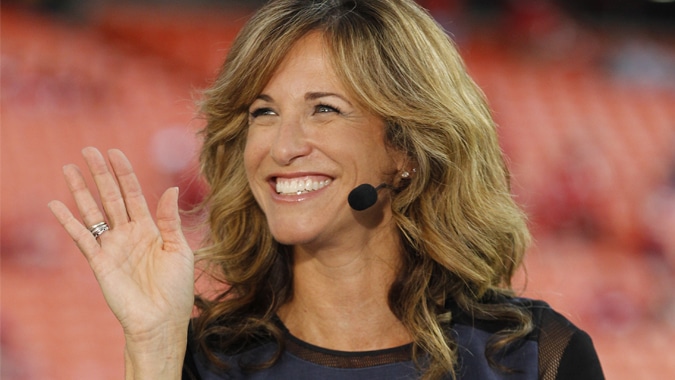 Suzanne Lisa Kolber, who is better known as Suzy Kolber, is a well known American football sideline reporter and a sportscaster for ESPN. She has reached the stage as one of the faces in terms of being a sportscaster at ESPN, which is considered the epitome for sports overall.

Kolber was born on May 14, 1964, in Philadelphia, Pennsylvania. She finished her high school studies at Upper Dublin High School in 1982. Later on, she joined the University of Miami where she graduated in 1986 with a Bachelor of Arts degree in telecommunications. She was building up her portfolio even during her University days having worked at Dynamic Cable as a sports director.

Quickly after her graduation, she started to work as a videotape coordinator for CBS Sports. By 1985, she already had the tagline of a producer working ferociously for the coming years to produce ET sportscast at WTVJ-TV in Miami. This would continue till 1989 and in between, she also did many freelancing gigs as well. Some of these included producing magazine shows like Greyhound Racing America and Cowboys Special Edition.

In terms of her experience with ESPN, it has been like a second home to her. Over the years, for ESPN, she has played different roles in different positions using the dynamic personality and ability that she has. She is most recognized as a sideline reporter on ESPN’s Monday Night Football with Michele Tafoya. In 2007, she was also a host for ESPN’s pre-race NASCAR Countdown program.

Her hard work has paid off as well as having won several titles. These include being the first female recipient of the Maxwell Club Sports Broadcaster of the Year Award in 2006 as well as named to Sports Business Daily’s 2004 list of the 10 favorite sports TV personalities of the past 10 years.

However, she has had some controversy as well during her work, which has been inevitable if we look at the careers of those at the top. While working to cover the 2011 NFL Draft, Kolber came under fire from the public after an interview with Mark Ingram Jr. started to talk about Ingram’s imprisoned father thus making him perceived in a way that the public didn’t like.

What is Suzy Kolber Net Worth?

Kolber has a large net worth of $18 million that she has accumulated over the years. Being one of the top sportscasters of a well-reputed name like ESPN, her pay is also one of the best in the industry.

Her annual salary reportedly is around $3 million in 2019. She has been ranked as No. 4 in CBS News’ list of TV’s Sexiest News Anchors, which shows that audiences stick to the channel when she is around. She is also associated with top brands like Chevrolet and Pepsi as a national television spokesperson and has been featured in different video game series in her role as a football broadcaster.

Suzy Kolber is married to her long-term boyfriend Eric Brady since 2008. They also have a daughter together named Kellyn.