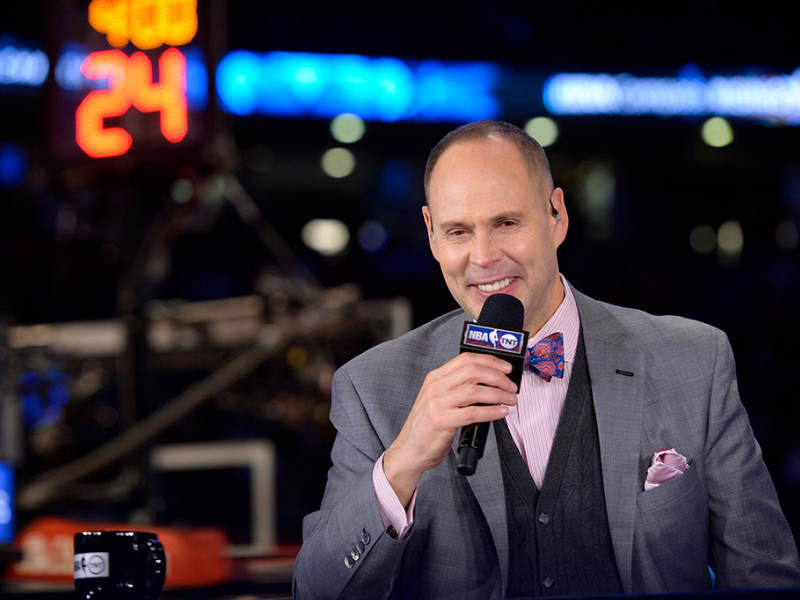 Ernest Thorwald Johnson Jr. is a sportscaster who leads the television voice on TBS for Major League Baseball. He is best known for being the host of the show Inside the NBA. As of 2019, Ernie Johnson Jr. Net Worth is estimated to be $1.5 million

Ernie was born on August 7, 1956, in Georgia. He is the son of Ernie Johnson Sr. who was a well-known pitcher playing in the Major League Baseball. He completed his high school studies from a private school named Marist School in his hometown. He studied at the University of Georgia where he first got a glimpse of being involved in his eventual profession.

His father might have been an inspiration for this as Johnson Sr. also was a play-by-play announcer for the Atlanta Braves. The job for him was to play the role of a news and sports director for the radio station WAGQ-FM in Athens, Georgia. He held that job until his graduation where he majored in journalism.

His career would officially begin in 1979 with WMAZ-TV where he worked as a news anchor. He has been involved in different facets of the game yet one of the shows which he has been most consistent in his career is in Inside the NBA where he has been hosting since 1990.

Aside from this, over the years he has been involved as a host for Tuesday Fan Night, 1992 Winter Olympics, Goodwill Games, Listen Up!, and NBA TV’s Open Court. But, Johnson’s analysis’ has not only been limited to certain sports only.

He has been the play-by-play announcer for TNT’s PGA Tour coverage and has won several awards as well with one of the most sand out ones being the was co-winner of the Sports Emmy for Outstanding Sports Personality, Studio Host.

He would later win the award on his own in 2006. His third Sports Emmy for Best Studio Host would come in 2015 where he did a humble act by giving the award to the daughters of the late Stuart Scott, who died in January 2015.

Johnson has an estimated net worth of $1.5 million. It has been reported that he earns an annual salary of around $300,000. He has also released his memoir called Unscripted: The Unpredictable Moments That Make Life Extraordinary.

Johnson and his wife, Cheryl have two biological children as well as four adopted children. Johnson is also heavily involved in his religion as a Christian and is associated with Fellowship of Christian Athletes (FCA), Athletes in Action (AIA), and Samaritan’s Feet.

Johnson was diagnosed with cancer where his treatment began in 2006. As a result, he missed several major sports events that year because of his chemotherapy treatments. The illness has been a sting for Johnson’s life even till now.

Most recently in 2018, he was not part of the MLB postseason because of being diagnosed with blood clots in both of his legs. Despite these setbacks in his health, his enthusiasm for sportscasting hasn’t ended and he is still very active.