Who is DeMarcus Ware?

DeMarcus Ware is a retired American football outside linebacker and defensive end who played nine seasons with the Dallas Cowboys and then three years with Denver Broncos of the National Football League.

He is now one of the contestants to take part in television dancing show “Dancing with the stars”.

DeMarcus played his high school football from Auburn High School where he played as both linebacker and wide receiver. He played his college football from Troy University where he was two-time All-Sun Belt Conference selection for the Troy Trojans football team.

At the end of 2012 season, Ware recorded 10+ sacks in seven straight seasons. Only two other players in NFL history have more consecutive seasons with 10+ sacks. 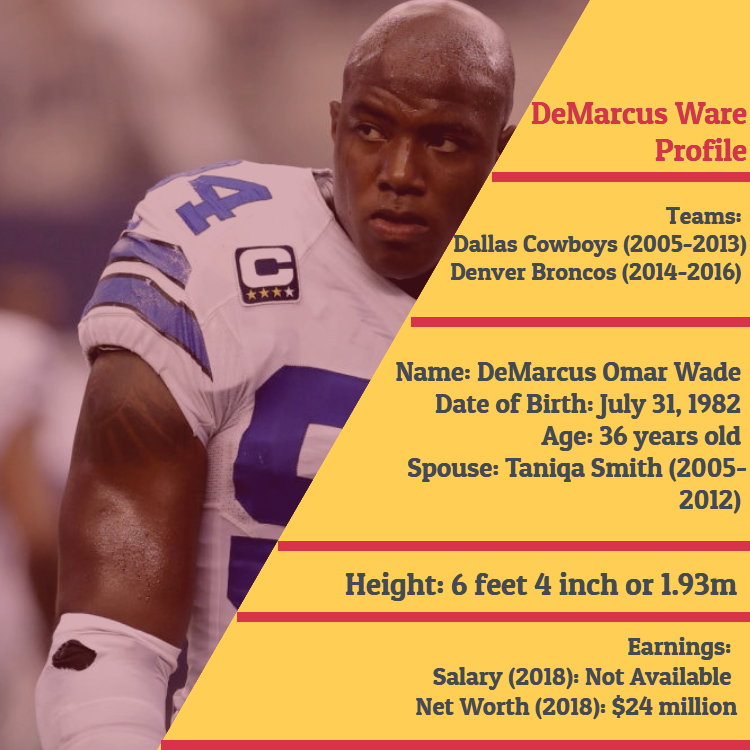 DeMarcus Ware Net Worth and Salary

DeMarcus’ last five year earnings during his time at NFL.

DeMarcus Ware Net Worth 2018 (as per Celebrity Net Worth): $24 million

“Power is nothing without a rock solid core. Pilates is the key to activating it…guys don’t be fooled just ’cause women do it. It’s no joke. Try it and you’ll find out real quick.” – DeMarcus Ware

“I think it doesn’t matter what type of helmet you wear. If you don’t know the hit is coming your body is not going to tense up and get ready for impact.” – DeMarcus Ware

“Sometimes in the heat of the battle you just got to calm down and use what you do in practice to avoid the penalties.” – DeMarcus Ware

“I have an opportunity to look kids in the face and let them know it’s not about where you come from; it’s how you use what you have to get to where you need to be.” – DeMarcus Ware