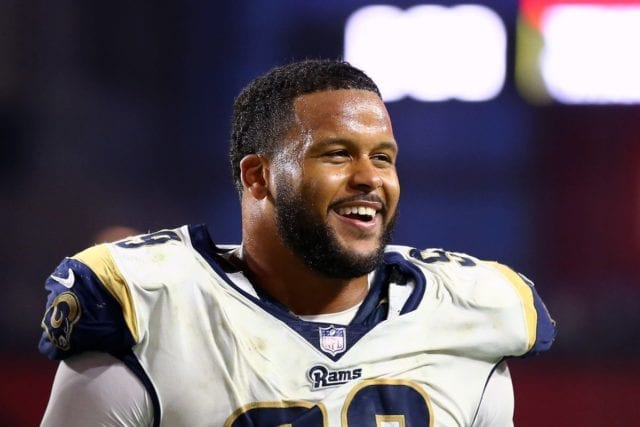 Who is Aaron Donald?

Aaron Donald is an American footballer who currently plays for the Los Angeles Rams in the NFL. Donald has the great physical strength and has been ranked as one of the top defensive players in the NFL.

Donald was born on May 23, 1991, in Pittsburgh. He grew up along with his two siblings with a humble beginning. His father Archie was also a football player and was a driving force who mentored Donald in his early days with them focusing on strength training. The two would be up before 5 am where they would work out in the basement gym that Donald’s father had made. He was impressive as a child playing and after high school, he committed to his hometown in Pittsburgh over other offers.

By the sophomore year of his college days, he was playing in the starting lineup and had a great campaign. He was named the ACC Defensive Player of the Year and was a unanimous All-American.

At the NFL Combine, Donald set the record for fastest 40-yard dash time for a defensive tackle with a 4.68. By 2014, he would sign a Rookie contract with the Rams with $10 million guaranteed over a four year period. He had a great start with him being a part of the 2015 Pro Bowl as well as being named the NFL Defensive Rookie of the Year award.

He has had some instances where his temper sometimes got the better of him which resulted in fines but they were nothing as big as his salary couldn’t handle.

As of 2019, Aaron Donald net worth is estimated to be over $35 million. He definitely falls among the elites at such a young age through the sheer effort he has put in over the years. He is currently the highest-paid defensive player in NFL history.

The six-year contract makes him worth $135 million among which the $87 million amount is guaranteed. This makes him the first non-quarterback to average more than $20 million annually.

His brother Archie Jr. is also a footballer. The two grew up and both trained together to get into the NFL. They both actually had a dream to help their parent’s retire, which they say was one of the driving forces in their career. Fast forward to today, they have made this dream a reality as retirement funds have been set up for them and brand new homes have been bought. Even today, when the three are together at home, they occasionally return to their old basement gym for offseason workouts.