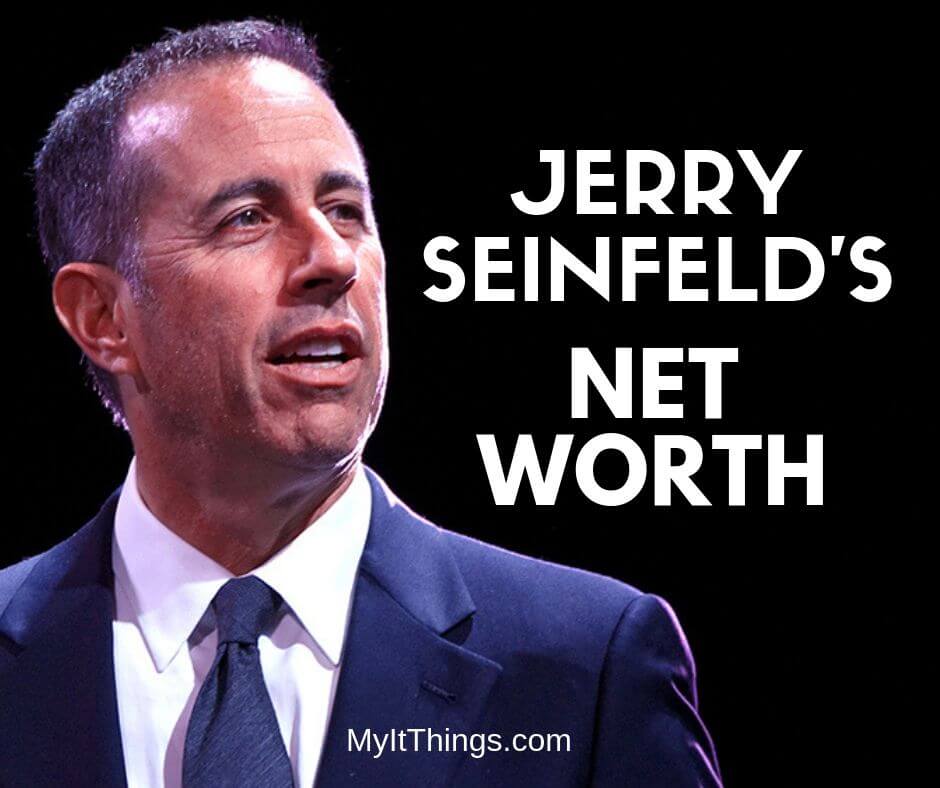 Jerry Seinfeld is the richest comedian on earth. His net worth went from about $350 million in 2010 to a whopping $950 million or almost a billion dollars in just barely a decade in 2019.

The source of his wealth comes from being a professional comedian and producer, particularly when it comes to his sweetheart deals for his highly rated 1990s sitcom, “Seinfeld”.

Jerry was born in Brooklyn, New York but grew up in Massapequa, New York. He attended Massapequa High School in Long Island. Then, when he was 16 years old, he volunteered in Israel as part of the Kibbutz Sa’ar.

He then attended the New York State University in Oswego before transferring to Queens College in his 2nd year, where he graduated with a degree in theater and communications. 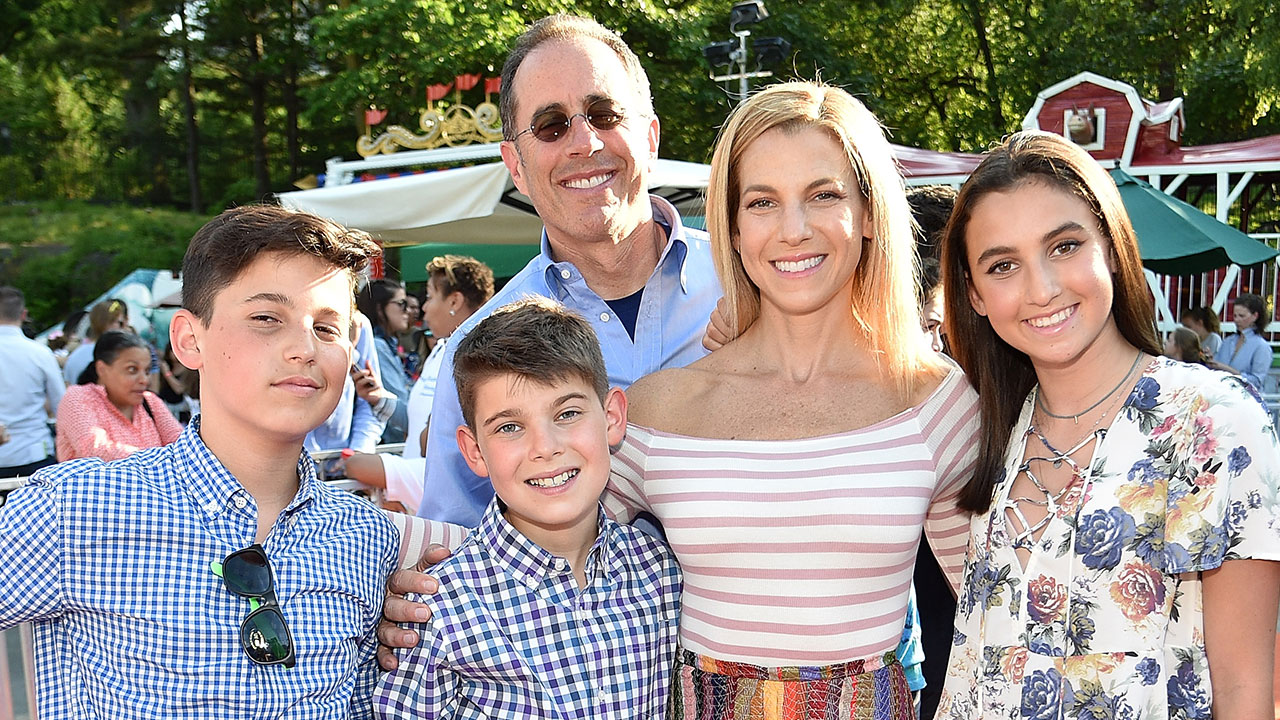 His father was Kalman Seinfeld (1918-1985), a Hungarian-Jewish man who collected jokes he heard while serving in the Second World War. His mother, Betty Seinfeld (nee Hosni; 1915-2015) was Mizrahi Jewish with parents from Aleppo, Syria.

Evan Seinfeld, the actor and musician, is his second cousin. He dated a 17-year-old girl in his late thirties and then broke up a newlywed couple in the Nineties to marry Jessica Sklar. They’ve been married for 20 years and have 3 children.

Jerry is an American comedian and television star. For 15 years, he grinded out a career in standup before hitting it big in television with his eponymous show “Seinfeld”. Before that, he ended up regularly appearing on the Tonight Show Starring Johnny Carson and the Late Show with David Letterman.

It was no cake walk to collaborate with co-creator Larry David to make one of the most successful sitcoms in history. He has kept up being busy to this day with his show, “Comedians in Cars Getting Coffee”.

Related  Brooke Houts Net Worth: How Rich is the YouTuber Actually?

How Does Jerry Seinfeld Make Money?

Jerry Seinfeld made money initially by doing standup comedy with his signature observational comedy style that’s currently parodied but was ahead of his time when he helped pioneer it. As of 2004, Jerry’s cumulative earnings from Seinfeld the sitcom got him $267 million, playing him as a top celebrity for that year.

He earned $100 million from standup performances and syndication deals in 2004 and an additional $60 million in 2006. He also got money appearing in 2008 Microsoft commercials with Bill Gates to advertise Windows.

Here is a list of Jerry Seinfeld’s money sources.

He earned his keep with his standup shows and appearances in the following.

He is a live-action and voice actor that has gotten roles in the following TV shows and films.

He has also gotten writing credits for Seinfeld and got producer credits in the following:

He also starred in Microsoft Windows commercials with Bill Gates back in 2008.

2. How Much Does Jerry Seinfeld Make In A Day?

Related  Tfue Net Worth: How Rich Is Fortnite Streamer Actually?

Houses And Cars Of Jerry Seinfeld

Jerry owns a $50 million estate in East Hampton, a home in Telluride, Colorado, and a Manhattan apartment overlooking Central park. He is also famous for his love of cars, second only perhaps to fellow automobile lover Jay Leno.

1. If you’re good at something, never do it for free.

Jerry was one of the pioneers of observational comedy that helped shape the careers of his contemporaries and successors. He also developed a kind of comedy that mainstream American families could appreciate to this day.

2. Make a name for yourself.

He has reaped the huge benefits of his show, allowing him to do pretty much anything he wants in spite of the box office bomb that was the Bee Movie and controversies regarding his gay jokes among college campuses. Neither of those things hurt his bottom line in the long run.

As a savvy businessman and producer, he remains a fixture among today’s comedy greats, his influence far-reaching. 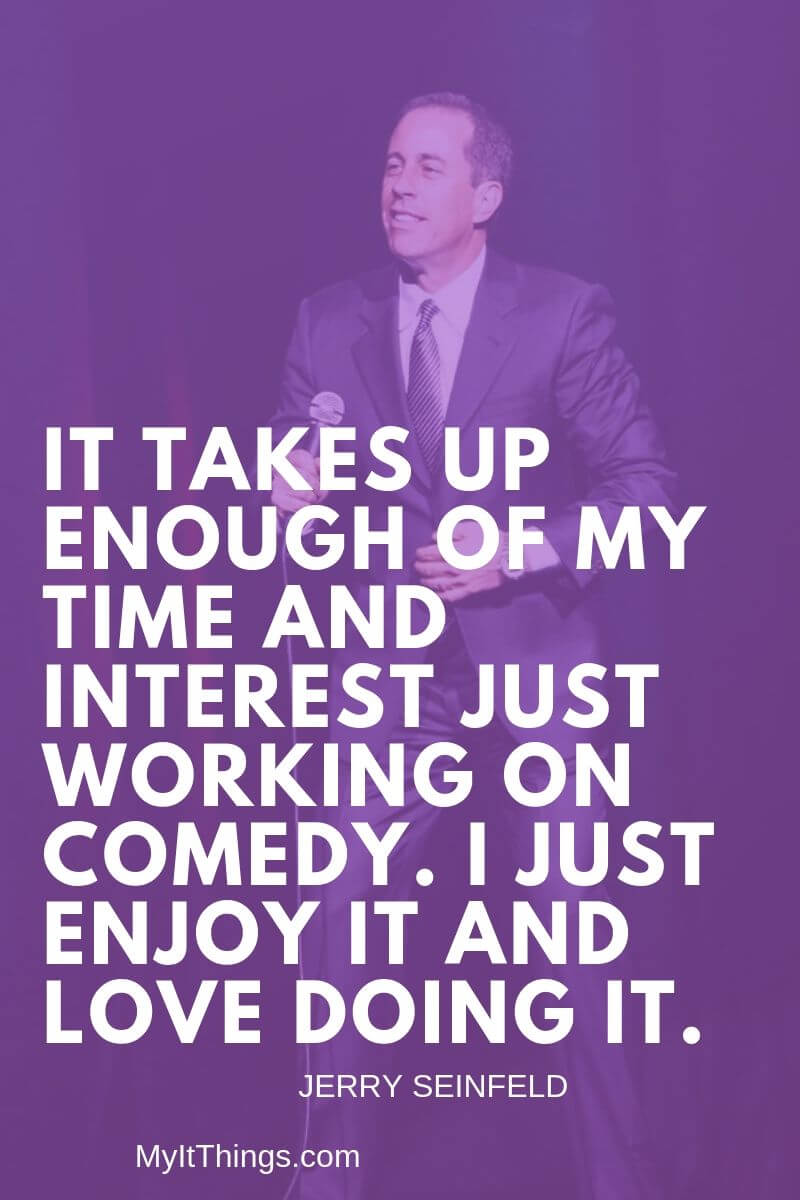 It takes up enough of my time and interest just working on comedy. I just enjoy it and love doing it. ~Jerry Seinfeld 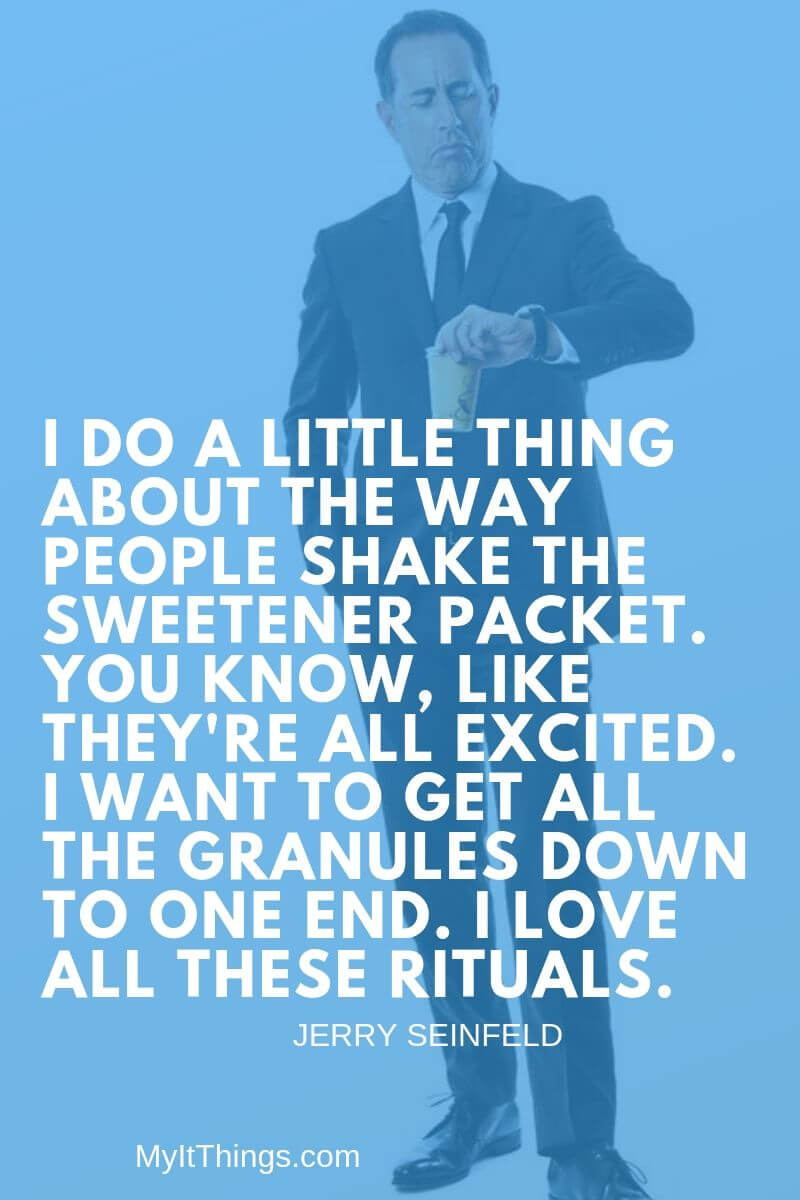 I do a little thing about the way people shake the sweetener packet. You know, like they’re all excited. I want to get all the granules down to one end. I love all these rituals. ~Jerry Seinfeld 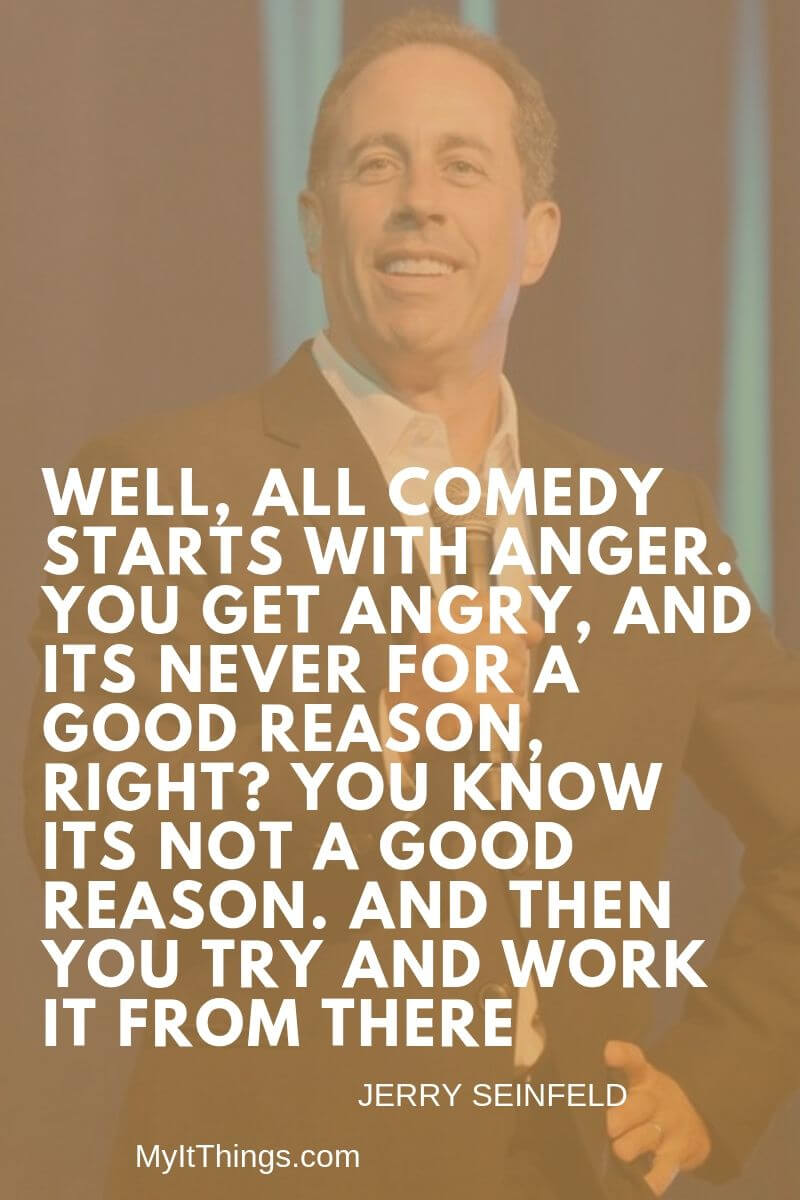 Well, all comedy starts with anger. You get angry, and its never for a good reason, right? You know its not a good reason. And then you try and work it from there. ~Jerry Seinfeld 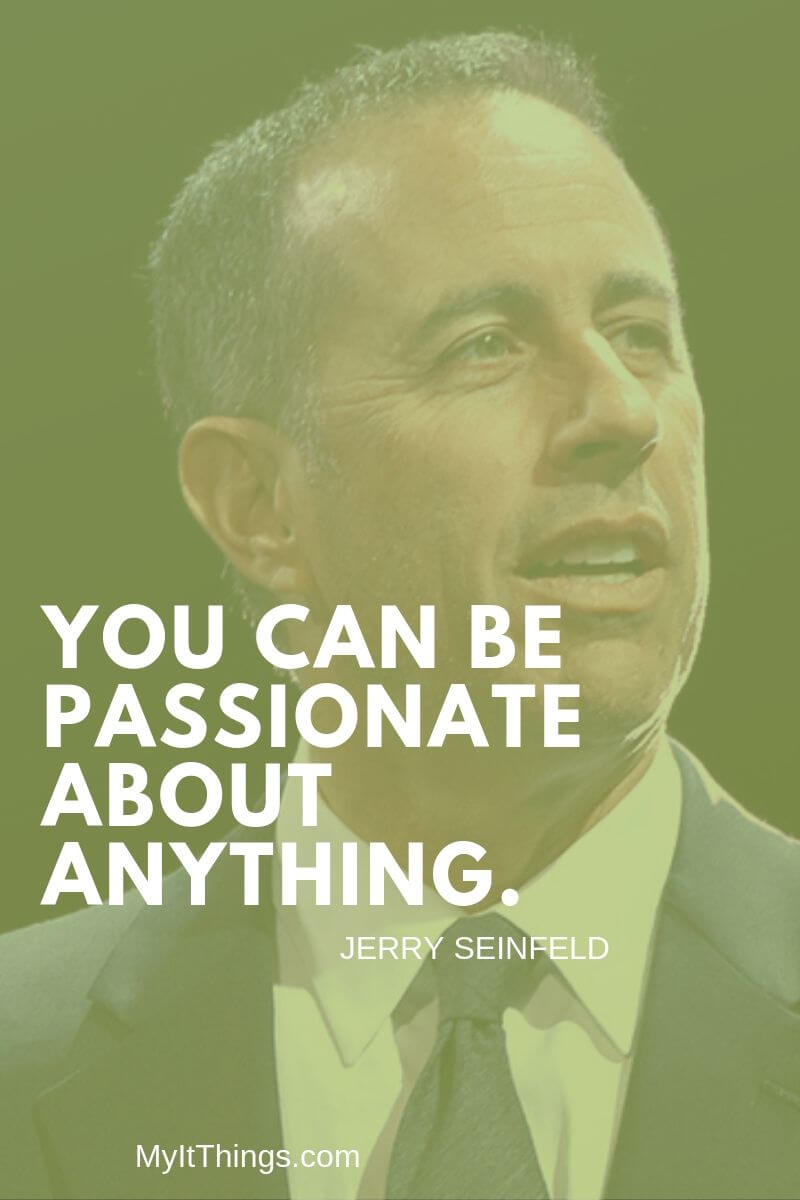 You can be passionate about anything. ~Jerry Seinfeld 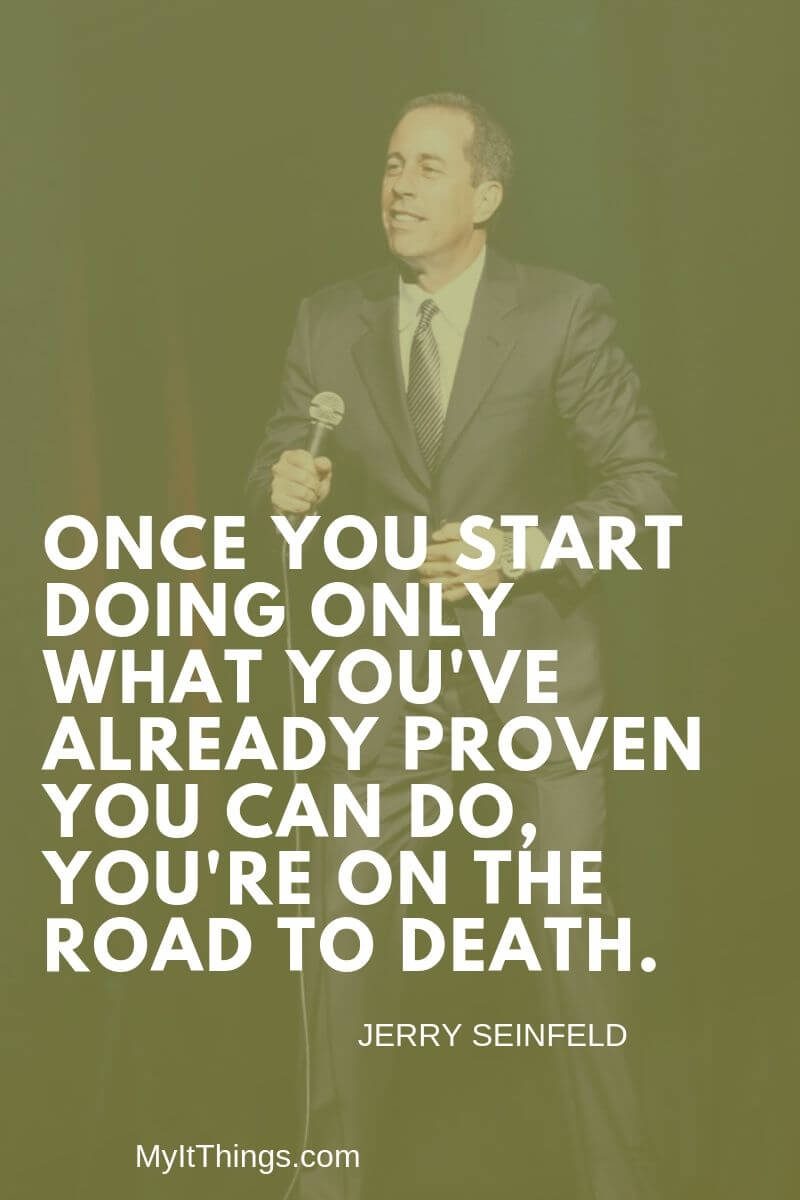 Once you start doing only what you’ve already proven you can do, you’re on the road to death. ~Jerry Seinfeld