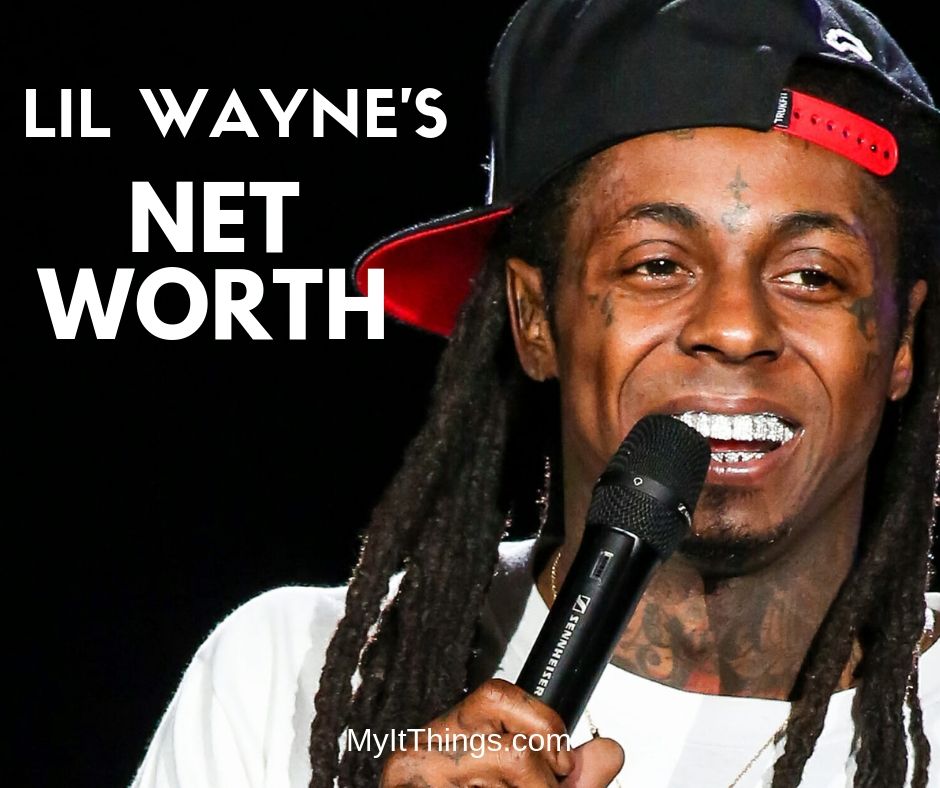 Lil Wayne is an American rapper turned music executive and producer who currently has a net worth of $120 million. He’s a New Orleans rapper who’s reached stardom that few musicians have enjoyed.

Wayne began his career as the 15-year-old ward of the Cash Money Records rap group known as “Hot Boys”. He started his solo career with the release of his “Tha Block Is Hot” debut album that reached #3 on the Billboard Charts and went double platinum.

Wayne was born on September 27, 1982 as Dwayne Michael Carter Jr. He grew up in the 17th Ward of New Orleans or the impoverished portion of the area known as the Hollygrove neighborhood.

He wrote his first rap song when he was 8 years old. He was an honors student in McMain Magnet School but dropped out at 14 years old to focus on his rap career.

Wayne’s mother, who was a cook named Jacida “Cita” Carter, gave birth to him when she was 19 years of age.

His parents divorced as his young age of 2 before his father, Dwayne Carter, left his family forever. Birdman, his record producer, served as his father figure even though his biological father is still living.

He also has a deceased stepfather named Reginald “Rabbit” McDonald, whom he considers as his real dad and was murdered before Wayne’s rise to stardom. He has four children (Reginae, Dwayne III, Cameron, and Neal).

Lil Wayne met Bryan Williams or Birdman the owner of “Cash Money Records” in Summer 1991. He recorded freestyle raps on Birdman’s answering machine, which piqued the record producer’s interest in the young man.

It was during Tha Carter and Tha Carter II (2005) that Wayne’s lyrical style became more thorough with his sense of self. He then became president of Cash Money in 2005 and founded an imprint of the label named “Young Money Entertainment”. After the release of Tha Carter III (2008), he was nominated for 8 Grammys, the most of any artist in 2008, taking home 4 of the 8. He went on to release 6 more albums across the decade, the latest of which is Tha Carter V (2018).

How Does Lil Wayne Make Money?

Lil Wayne mostly makes money from his music and artistry. He sells a huge amount of rap albums. For example, when he released Tha Carter V (2018) after lengthy delays, it still sold 480,000 units in the first week and became certified platinum soon after. The rapper turned music mogul has sold over 110 million records all over the world, which includes 37 million digital tracks and 15 million albums in the U.S alone.

He also makes money as the CEO of Young Money Entertainment for good measure. He even makes money from endorsement deals, his clothing line, guest appearances in various shows, his own memoir, and his own documentary. This makes him one of the best-selling artists of all time. Not just rap artist but artist.

Most of Lil Wayne’s fortune comes from all the successful rap albums and songs he has released in his musical career, such as the following.

He has also been paid for various film and television roles or cameos, which include the following.

Lil Wayne has also earned a lot of publicity and “cash money” from collaborating with dozens of musicians such as the following.

As the CEO of Young Money Entertainment, he nets a salary from that role as well due to its links to notable artists such as:

He made his first endorsement deal with Pepsi’s Mountain Dew. He also launched his own clothing line called “Trukfit”.

He also made money from his memoir “Gone Til’ November: A Journal of Rikers Island” released in October 11, 2016.

He even made his own documentary—Tha Carter—that was featured in the 2009 Sundance Film Festival.

Since 2007, Lil Wayne has earned a total of $208 million in career earnings. There are no listed net worth archives for 2010 and 2011 even though he earned $20 million and $15 million for those years respectively.

How Much Does Lil Wayne Make In A Day?

Houses And Cars Of Lil Wayne 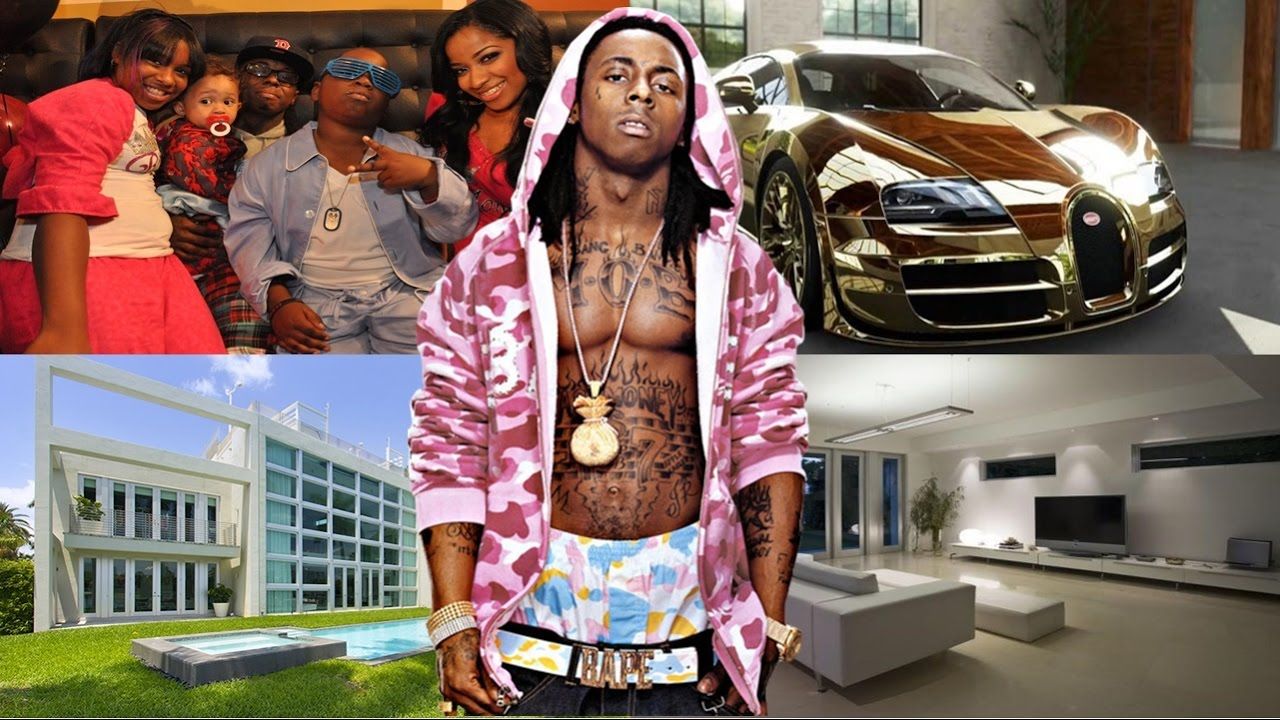 Lil Wayne owns a $13 million, 15,100-square-foot mansion in Miami. He handed over $7.72 million in back taxes to the U.S. government for this mansion that was built back in 2004. It has a glass elevator, 9 bedrooms, 2 partial baths, and 9 full bathrooms as well as a 2-storey master suit, private sky terrace, and a 3-bedroom guesthouse. He also owns a 10,000-square-foot New Orleans house that he bought back in 2006 but is currently for sale.

The mansion comes with 5 bedrooms, 7 bathrooms, and a spacious fully stainless kitchen and dining space. He also bought a $1.7 million, 10,084-square-foot home in Kenner, Jefferson Parish, Louisiana. It comes with a swimming pool, jetted tub, living room staircase, 5 bedrooms, and 5 bathrooms. Lil Wayne even owns a Rolls Royce Phantom Drophead Coupe, a Bugatti Veyron, and a Campagna T-Rex 14R as his three-car collection.

Lil Wayne’s success has been fraught with peril and continuous controversy. The main success lesson you can get from him as you go about your own personal career or entrepreneurial efforts is growth and taking risk.

He was able to weather the storms of controversy from having a feud with Birdman (the rapper who helped get him into the business) to his arrests and incarceration to his lawsuits to his health issues because he knows how to evolve and endure.

2. What Doesn’t Kill You Makes You Stronger

He has had feuds with Jay-Z, Pusha T, Young Buck, and Juvenile for good measure. His success isn’t a fluke like Buster Douglas beating Mike Tyson only to lose to Evander Holyfield.

Rather, he built upon his lucky break so that his career is able to soar despite all the problems he has faced and the issues he has to deal with. He’s a fighter who just gets better after every experience so he’s able to make the most of his luck and talents despite numerous setbacks. What doesn’t kill him makes him stronger. 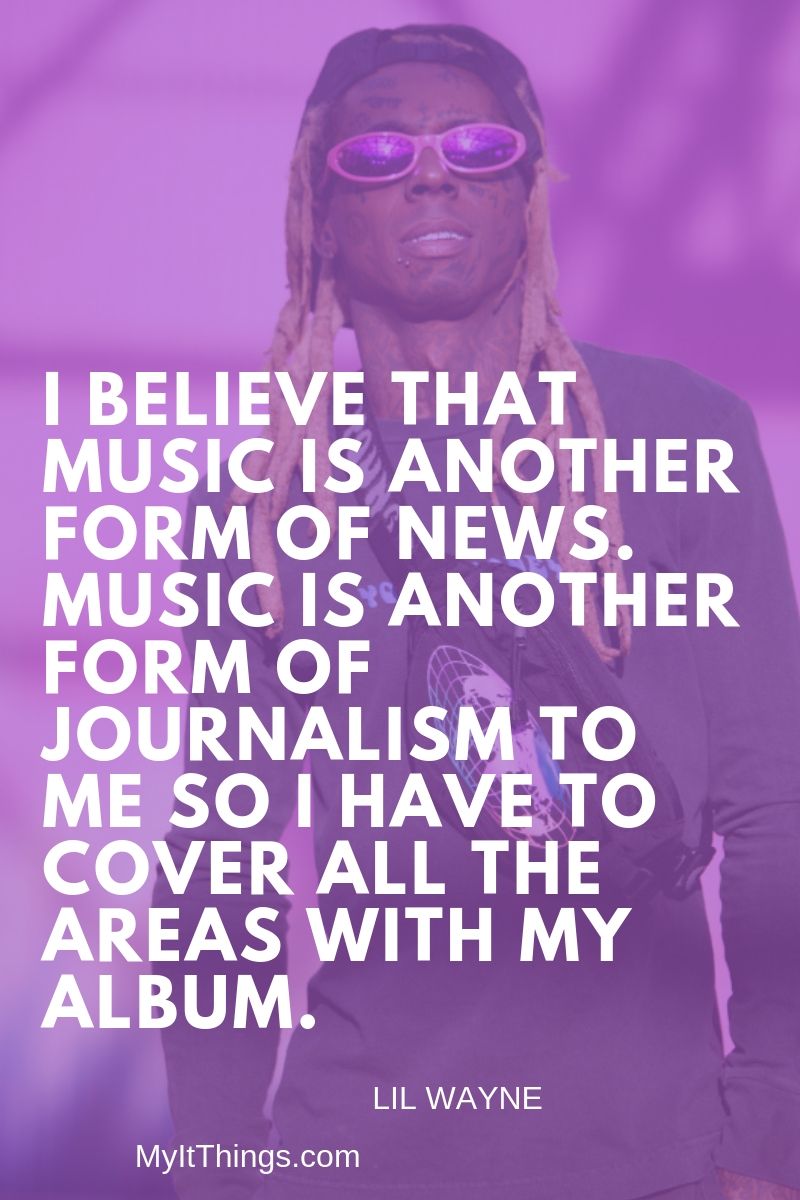 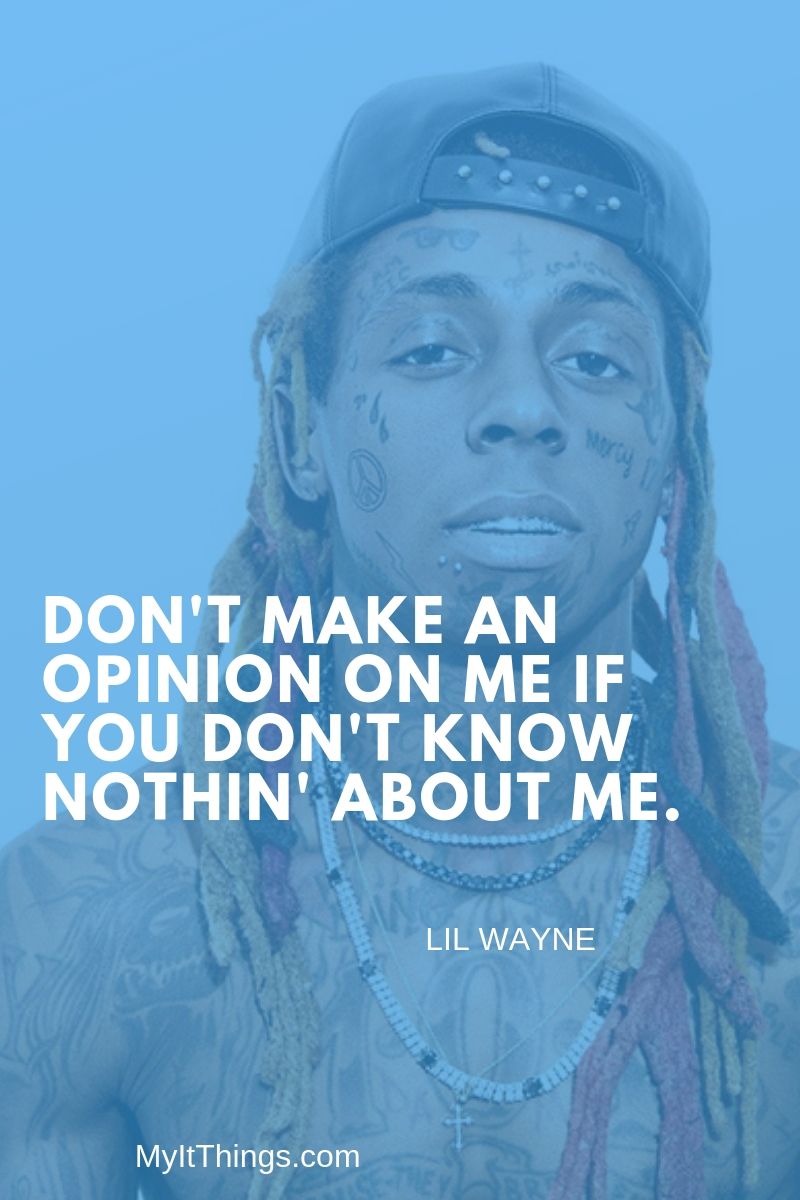 Don’t make an opinion on me if you don’t know nothin’ about me. 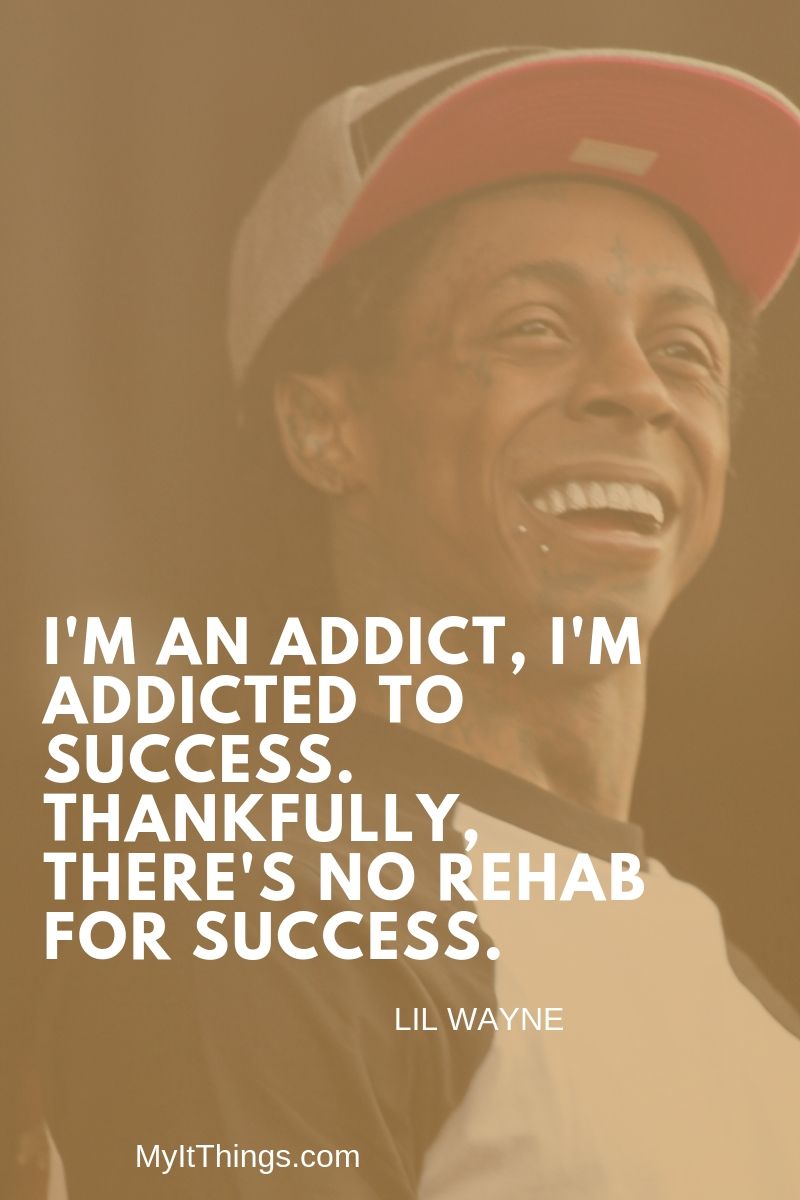 I’m an addict, I’m addicted to success. Thankfully, there’s no rehab for success. 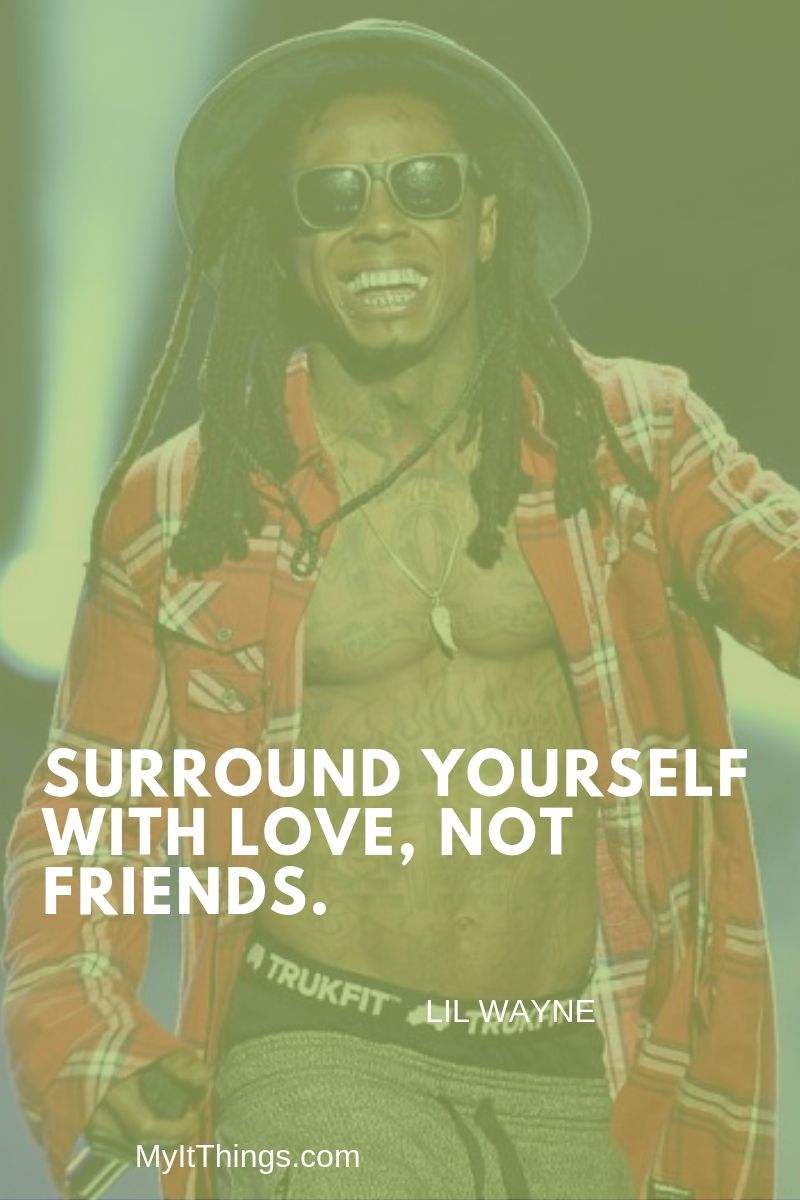 Surround yourself with love, not friends. 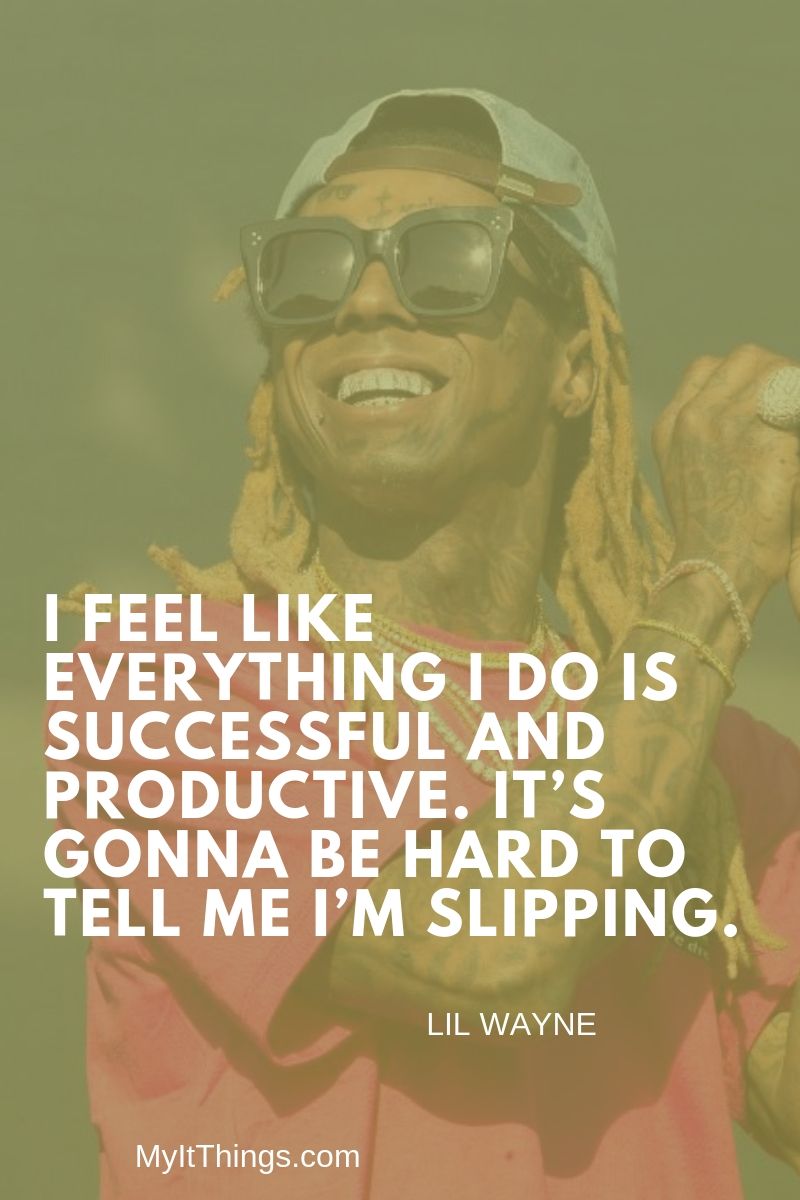 I feel like everything I do is successful and productive. It’s gonna be hard to tell me I’m slipping.