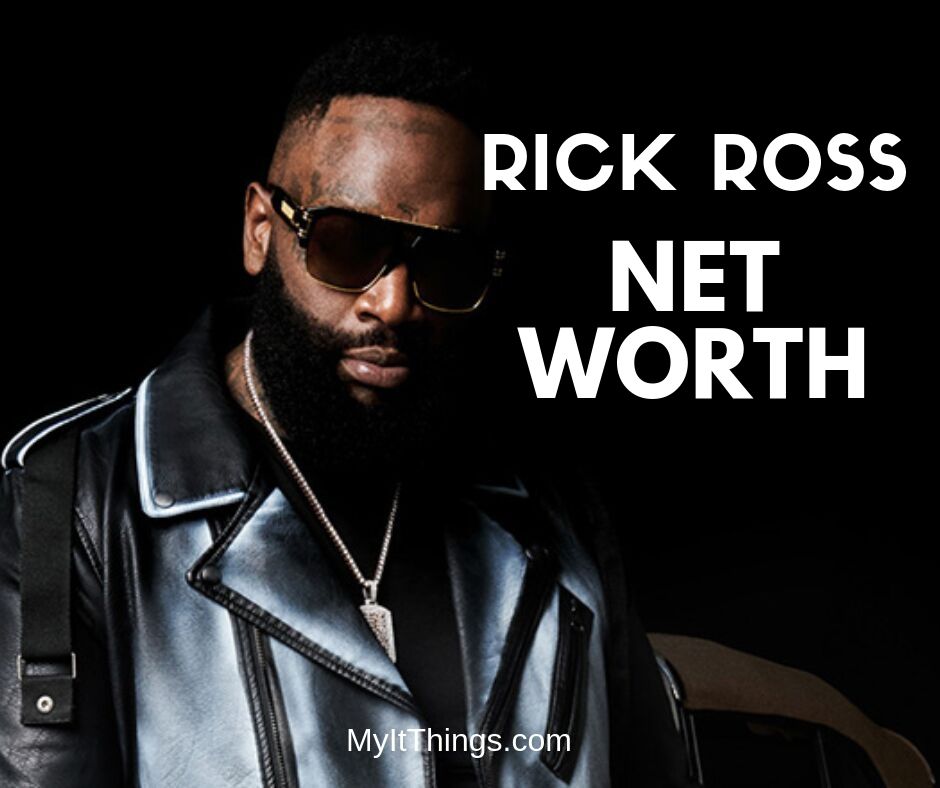 Rick Ross is an American rap artist and songwriter turned hip-hop mogul and record executive who has made hit albums and songs like “Hustlin'” as well as associated with the best in the music business such as T-Pain, Nas, Meek Mill, and DJ Khaled. Everyone from P-Diddy to Jay-Z was looking to sign him up until he himself entered the business with his own label.

Rick Ross was born William Leonard Roberts II and was from Clarksdale, Mississippi. He was then raised in Carol City, Florida.

He then worked from December 1995 to June 1997 as a correctional officer.

Rick Ross’s parents are Sonny Ross and Tommie Roberts. He also has a sister named Tawanda Roberts. He even has 4 children, and they are Toie Roberts, William Roberts III, Berkeley Hermes Roberts, and Billion Leonard Roberts.

He made his debut as “Teflon Da Don” in Suave House Records. He made his recording debut on “Ain’t Shhh to Discuss” on Erick Sermon’s Def Squad Presents Erick Onasis. In the 2000s, he changed his professional name to Rick Ross. He then signed with Slip-n-Slide Records, touring with Trick Daddy and making guest performances in other Slip-n-Slide albums.

He then released his debut single, “Hustlin'” in 2006 for his “Port of Miami” album to wide acclaim. It peaked at #54 in the Billboard Hot 100. Most importantly, he became the subject of a bidding war. He received offers by Irv Gotti’s Murder Inc. and Diddy’s Bad Boy Entertainment before he signed to Jay-Z’s Def Jam Records.

His “Port of Miami” album debuted at the top spot of the U.S. Billboard 200 album chart, getting 187,000 units sold in the first week. He then released a second album, “Trilla” in 2008, once again debuting as #1 at the Billboard 200. In 2009, Rick founded the Maybach Music Group. This is where he released many other albums of his.

How Does Rick Ross Make Money?

Rick Ross is a record executive, entrepreneur, and rapper. He mostly made his fortune by being a recording artist then by becoming his own record producer as well, releasing the rest of his albums under his Maybach Music label.

He was even the first artist signed to Ciroc Entertainment, which is Diddy’s management company. He also does endorsements and promotions to boot.

Here is a list of Rick Ross’s money sources.

Rick is a highly successful hip-hop music artist, with albums spanning from 2006 to 2019. They include the following.

He has also gotten film and television roles, gigs, and appearances galore, which include the following.

Rick got signed for millions of dollars by labels such as Epic, Atlantic, Def Jam, Suave House, Slip-n-Slide, and Poe Boy. In 2009, he founded Maybach Music and released the rest of his studio albums there.

As of 2017, Rick has also entered the restaurant business by owning several Wingstop locations. Wingstop is a fast food chain that specializes in chicken wings.

There wasn’t an archive for Rick Ross’s net worth from 2010 to 2011, but it is known that he made $5 million and $6 million respectively during those years.

How Much Does Rick Ross Make In A Day? 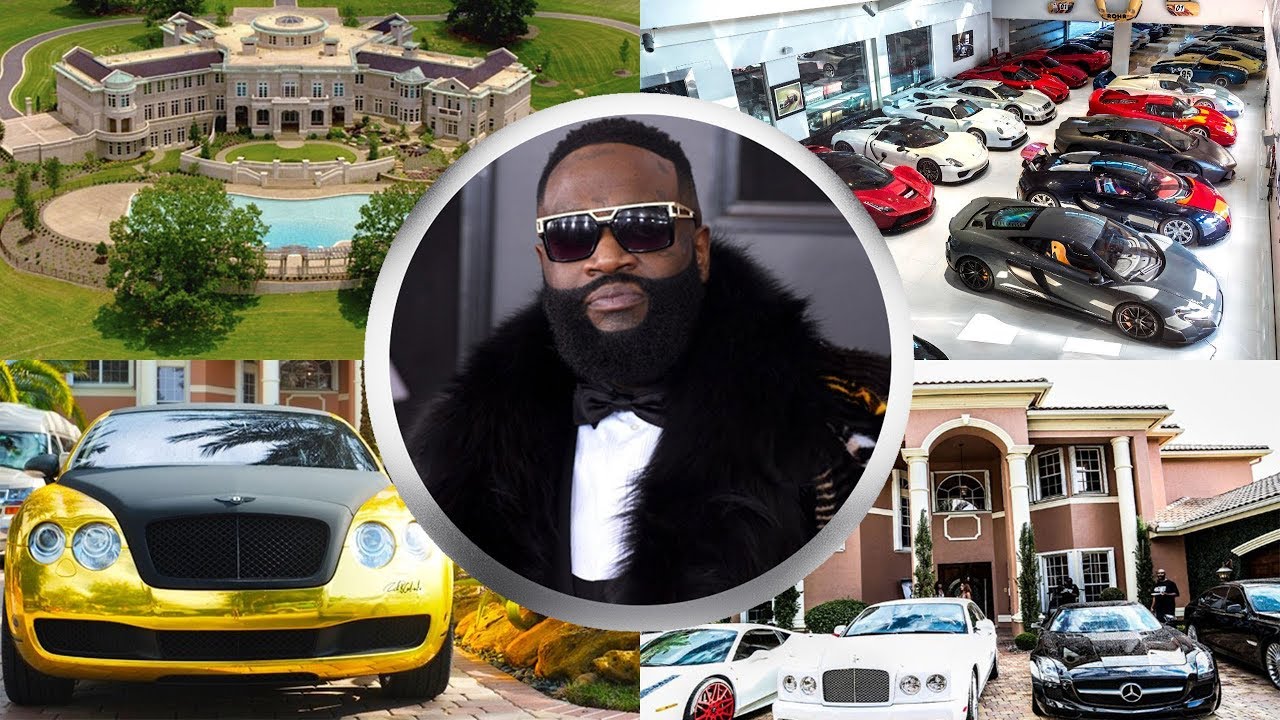 He also owns a $35,000 Aprilia Motorbike (Rick Ross Edition). He is even an avid video game collector and has every game released from Coleco to Xbox.

Rick Ross is a true “Teflon Don”, with no controversy, health problems, or assassination attempts ever sticking to him or affecting his bottom line. Rather than lose money, controversy has actually helped raise his profile and make him become either more famous or more feared. Reputation and credibility is everything in the rap game, after all.

He has feuded with 50 Cent and faced allegations that he lacked “gangsta” credentials or is a faker with an inauthentic “tough guy” persona. With that said, even if he didn’t really have “gangsta” origins, he nevertheless transformed himself into one through the years through the continuing success of his albums and the rise of his net worth.

He’s like meek chemistry teacher Walter White transforming into drug lord Heisenberg the more money and fame he got through the years. If he wasn’t “gangsta” before, he’s “gangsta” now. 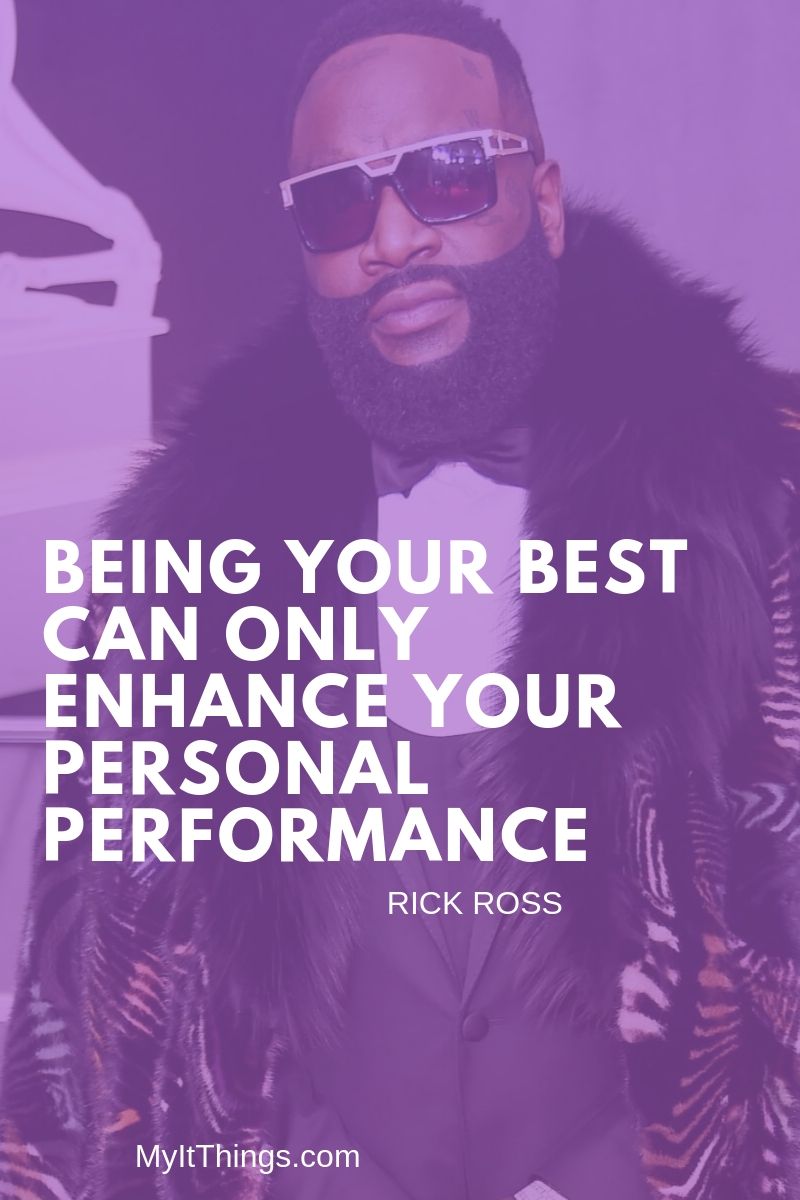 Being your best can only enhance your personal performance. ~Rick Ross 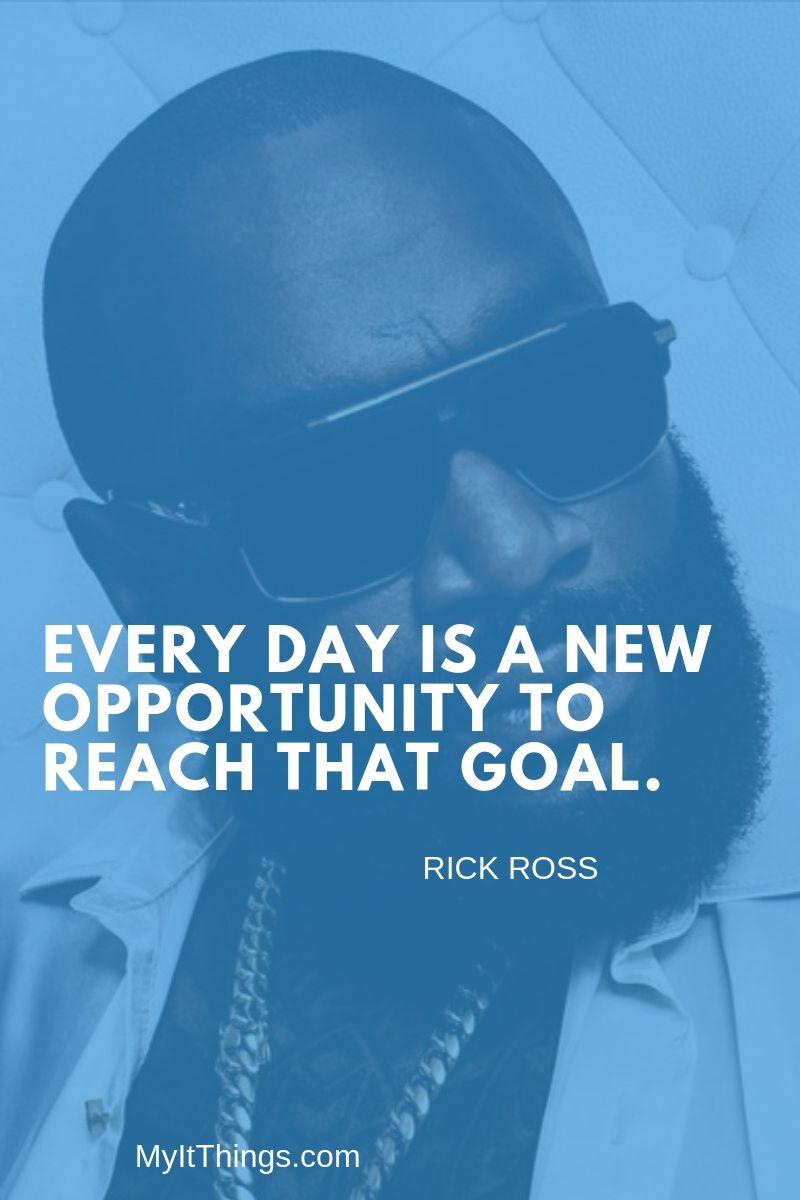 Every day is a new opportunity to reach that goal. ~Rick Ross 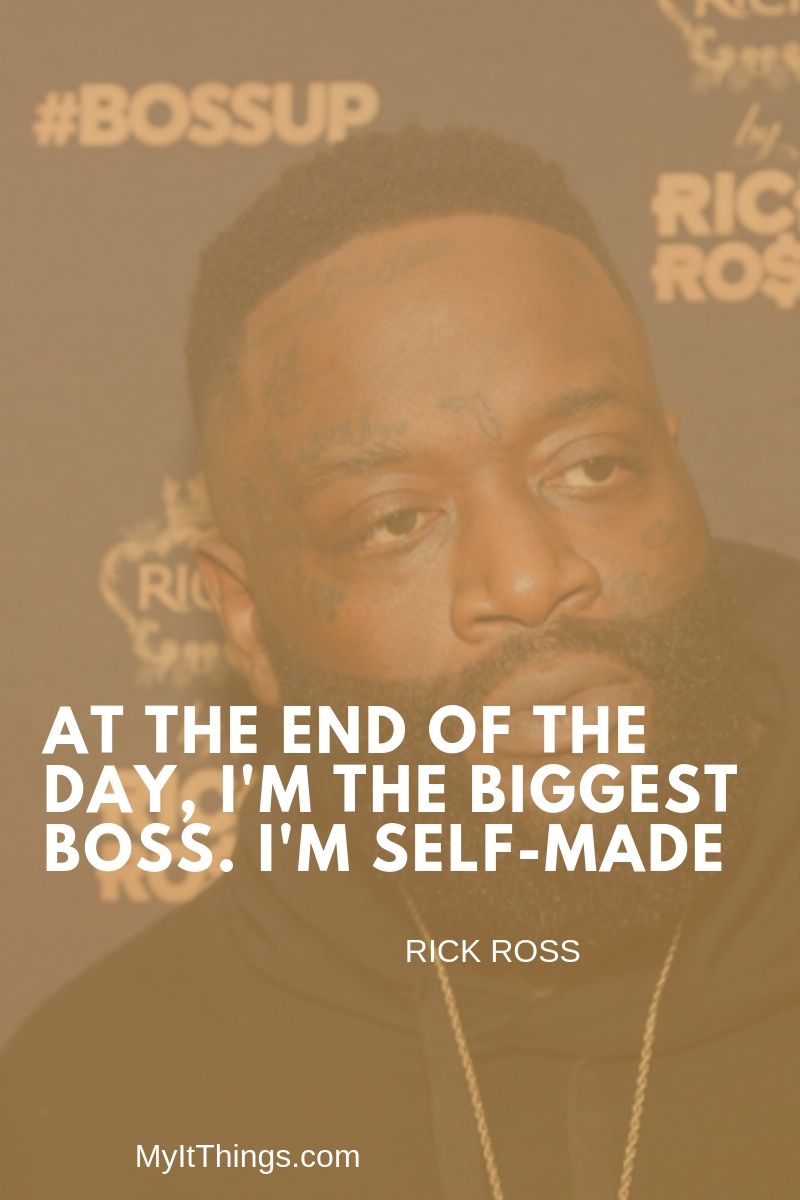 At the end of the day, I’m the biggest boss. I’m self-made. ~Rick Ross 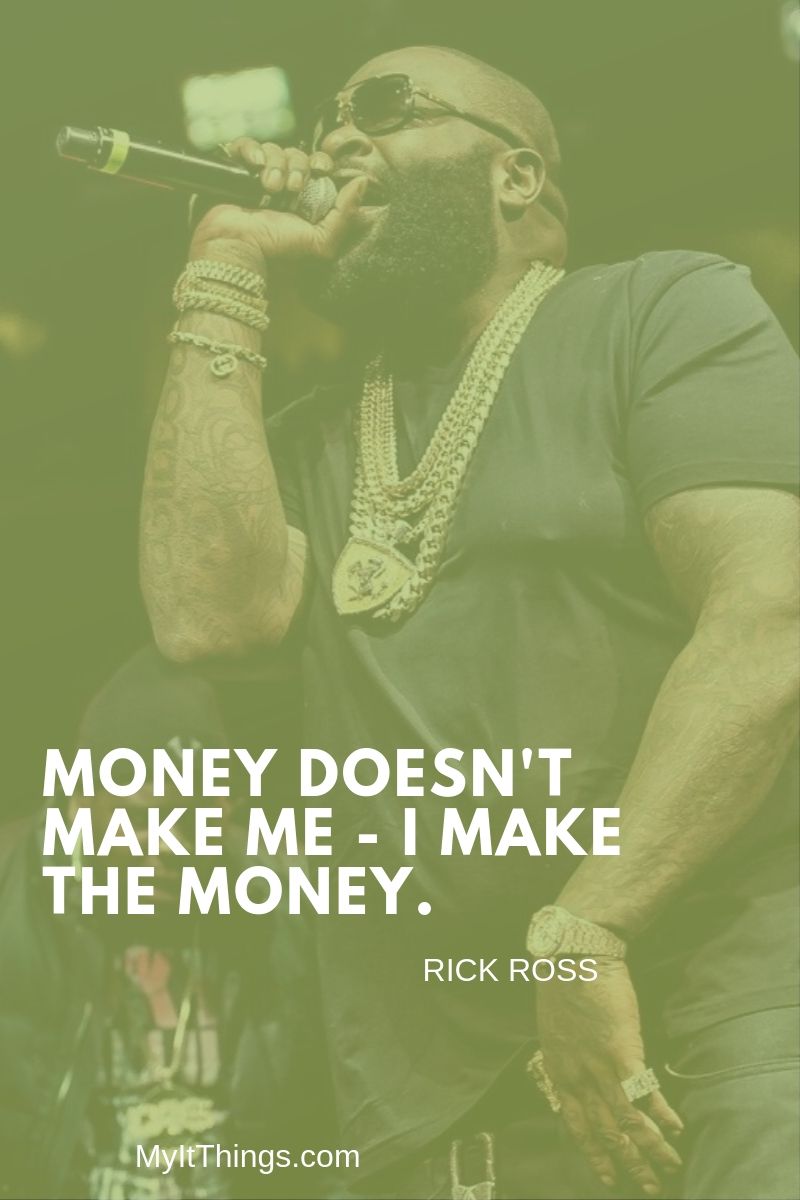 Money doesn’t make me – I make the money. ~Rick Ross 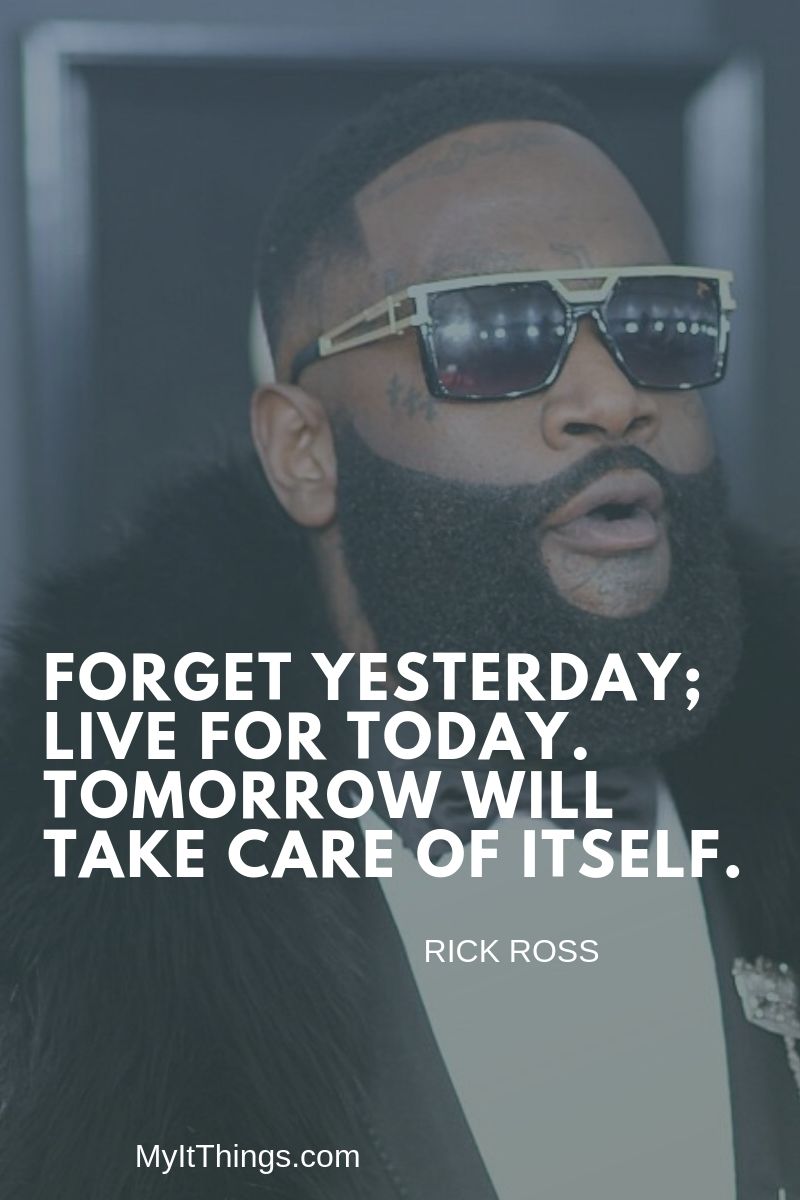 Forget yesterday; live for today. Tomorrow will take care of itself. ~Rick Ross