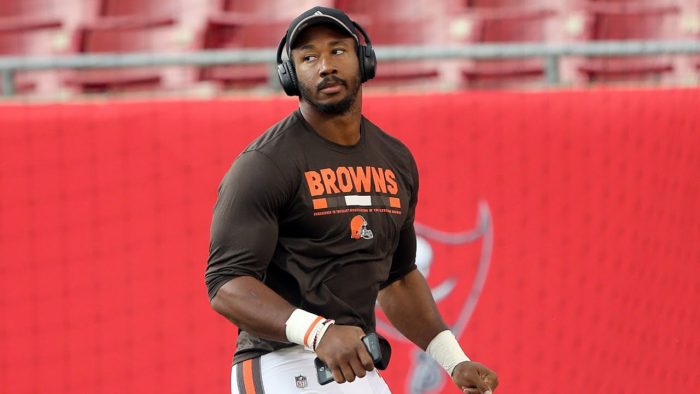 Myles Garrett is an American football defensive end who plays for the Cleveland Browns of the National Football League. He was indefinitely suspended Garrett on November 15, 2019, for a fight occurring in a game against the Pittsburgh Steelers. Myles Garrett net worth as of 2019 is estimated to be $12 million.

Born on December 29, 1995, in Arlington, Texas, Myles attended Martin High School where he was a letterman in football, basketball, and track. During his school career, he was a five-star recruit and was ranked as the 2nd best overall player in the class.

Myles then played his college football at Texas A&M University. As a freshman in 2014, he broke Texas A&M’s freshman sack record of 5.5 in just six games. He finished the 2014 freshman season with 11.5 sacks, 53 total tackles, 14 tackles for loss, 10 quarterback hurries, and a blocked kick.

During his Sophomore year, he recorded 57 total tackles (36 solo), 18.5 tackles for loss, seven quarterback hurries, five forced fumbles, and a blocked punt. He earned the Bill Wills Award as a top defensive lineman.

Garrett was selected by Cleveland Browns in the 1st overall pick of the 2017 NFL Draft making him the highest draft pick from Texas A&M in the history of NFL draft. Browns signed Garrett on a four-year, $30.41 million contract which includes a $20.25 million signing bonus.

Garrett had to miss the start of the season due to ankle injury but nonetheless, he recorded 28 combined tackles (16 solo), seven sacks, one pass defended, and one fumble recovery during his rookie season. The following season, he was named a defensive captain. The same year, he was ranked 49th by his fellow players on the NFL Top 100 Players of 2019.

Recently, in a match against the Pittsburgh Steelers, Garrett was involved in a fight against Steelers Mason Rudolph. He swung the helmet and struck Rudolph in the head with the underside of the helmet. The NFL issued a statement saying Garrett will be suspended indefinitely including the remainder of the 2019 regular season and postseason.