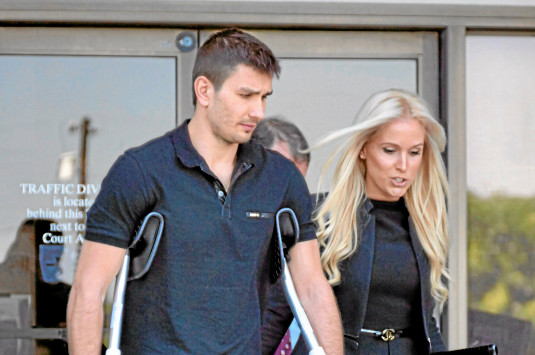 Marta Varlamova is the wife of Russian Ice Hockey defenceman Slava Voynov. Recently NHL announced that her husband Voynov is suspended for the entire 2019/20 season and the 2020 Stanley Cup playoffs for his bad behavior.

As we know, Slava Voynov played for Los Angeles Kings and also SKA Saint Petersburg for the KHL while he was being suspended by the NHL. He was selected by the Kings in the 2nd round, 32nd overall of the 2008 NHL Entry Draft but the Kings terminated his six-year $25 million contract back in 2015 because of his bad behavior.

The incident happened back in October of 2014 when Voynov was suspended by the NHL after being arrested on misdemeanor domestic violence charges. He pleaded not guilty to the charges of domestic violence.

After a couple of months, an officer testified that Marta Varlamova told police that Voynov punched, kicked and choked her and her face was cut after Voynov pushed her into a flat-screen television. The officer also testified seeing a laceration about her left eye, blood streaming and red marks on her neck. One day later, TMZ published a letter Varlamova wrote to LA County stating that he had not intended to injure her and requesting that Voynov not be charged.

On September 17, 2015, LA Kings terminated his contract and he decided to return back to Russia. He signed a contract with Russian club SKA Saint Petersburg. Recently, on April 9, 2019, the NHL announced that he will be suspended for the entire 2019/20 season and the 2020 Stanley Cup playoffs. Assuming his good behavior, his eligibility could be restored on July 1, 2020.

Regarding Voynov’s wife Marta we don’t know much about her personal life. What we know is that she has one daughter from a previous relationship, even though media sometimes refer to Marta’s daughter as a Slava’s kid.