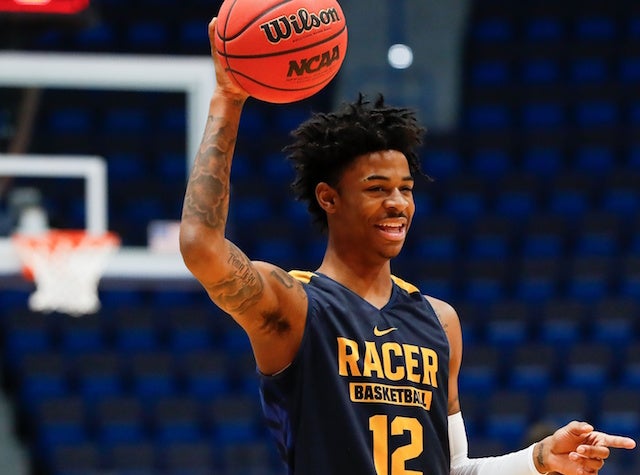 Who is Ja Morant?

Ja Morant is an American basketball player who previously played for the Murray State Racers of the Ohio Valley Conference (OVC). He is top talent who many eyes to be one of the top picks for the upcoming 2019 NBA draft.

Morant was born on August 10, 1999, in Dalzell, South Carolina. His father is Tee Morant, who was also a basketball player in his days playing for Clafin University. Morant has a younger sister named Teniya who would play alongside him growing up and now competes for Hillcrest Middle School. Morant has the advice of his mother “beneath no one,” tattooed in his left arm.

He couldn’t take off his career because of some circumstances in life and would later support the family by being a farmer. Yet, maybe because of this his father saw his dream being fulfilled through his son and mentored him to be a great player. This type of cultivation helped Morant play against big opponents easily when he was younger.

He studied at Crestwood High School where he would end up as the all-time leading scorer, with 1,679 points. He played for the South Carolina Hornets and would be in the same team alongside Zion Williamson. Morant also left high school as a three-time All-Region Most Valuable Player (MVP).

Morant actually wasn’t recruited the normal way since the top recruiters didn’t rank him. Yet, he was actually accidentally discovered by a coach named James Kane of Murray State. Morant was playing a casual game that Kane noticed and would contact the head coach Matt McMahon who would later offer him a scholarship. On September 3, 2016, Morant committed to playing for Murray State.

This candid decision would yield great results. In his freshman year, he made the second triple-double in school history.  Morant also had the third-most assists in a single game by a Murray State player. He had a breakout sophomore season, which saw him win OVC Player of the Year and lead the NCAA in assists. To top it off, his hard work also made him the first player in NCAA history to average at least 20 points and 10 assists per game in a single season. That was impressive, to say the least.

It is around this time that Morant would be projected to be involved in the 2019 NBA draft with him starting to get media attention. It all started when Yahoo sports journalist Pat Forde had a lot of praise for the young player. Morant went forward to earn the first-team All-American honors from the United States Basketball Writers Association. After Murray State faced a loss at the 2019 NCAA Men’s Basketball Tournament, Morant made the announcement that he would forgo his latter two seasons at college in order to officially enter the NBA draft.

Ja Morant’s net worth is still under review while his salary is also still unknown.