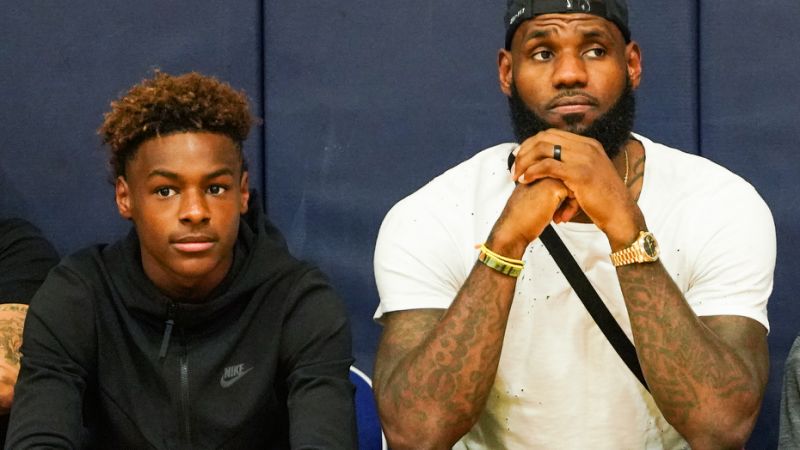 LeBron James Jr. also known as Bronny James is an American basketball player who currently plays for the North Coast Blue Chips at the Amateur Athletic Union. He is the eldest son of NBA legend LeBron James.

Bronny was born on October 6, 2004, in Cleveland, Ohio to LeBron James and his high school girlfriend Savannah Brinson (who is now his wife). Both his parents were involved in sports at that time. LeBron mostly played football and basketball while his mother played softball and was also a cheerleader.

Her mother became pregnant with him when she was in the middle of the senior academic year of high school. LeBron was 19 years old at that time while Savannah was 18 years old. He has a younger brother named Bryce Maximus and a younger sister named Zhuri.

Like his father, LeBron James Jr. started playing basketball at an early age. In addition to that, he is also skillful at playing ice hockey and soccer. However, his father did not allow him to play football or ice hockey over safety concerns.

He started playing basketball at the age of 9. He played for the Miami City Ballers at a fourth grade AAU tournament. The kid started dominating on the court and garnered major college interest nationally, including from Ohio State coach Thad Matta for future recruitment. In June of 2015, he led his AAU team, the Gulf Coast Blue Chips to win the League Dallas/Hype Sports Summer Jam. Next year, he received offers to play college basketball for Kentucky and Duke.

Related  Top Benefits of Being in NBA

In March 2017, Bronny took part in the John Lucas All-Star Weekend tournament. Later that month, he led the North Coast Blue Chips AAU team to a 5-0 record at the Michigan Basketball Academy’s Spring Showcase. He received praise from several media outlets including Washington Post who said: “he is maybe better than his dad in some ways”.

His father LeBron James wasn’t shy either to praise how good his son is. He said, “I didn’t handle the ball as well as he does. He handles the ball exceptionally and shoots it a lot better than I did at that age”.

In February 2018, he helped Old Trail School to win ISL Tournament title. On April 2, 2018, he helped the Blue Chips finish undefeated and win the under-13 title at the NY2LA Swish ‘N Dish Tournament. On August 6, 2018, it was announced that he would attend Crossroads School in California.

The son of the legendary basketball player stands 5 feet 11 inch or 180 cm tall which is considered okay for basketball player of that age. He is only 14 years of age and his height is going to increase substantially in the coming years. Meanwhile, he weighs 65 kg or 143 pounds.

He is currently studying at a high school level. He hasn’t earned a significant amount of money as a basketball player (as of now). To be fair, he doesn’t have a shortage of money as his dad LeBron James is worth more than $450 million.

Does he have any girlfriend?

He is only 14 years of age. We haven’t heard any public rumors about him dating a girl. He is currently focused on building his career. As of now, he is single.