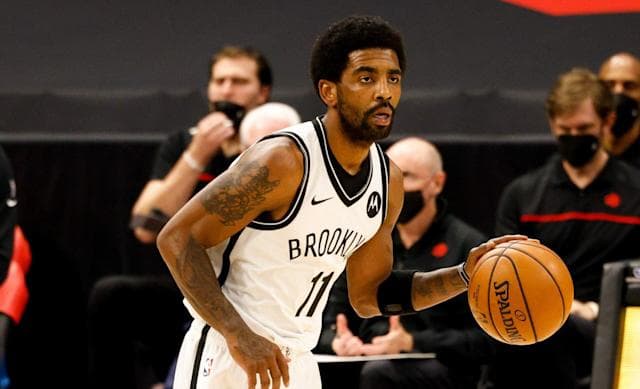 For pretty much all the offseason, the Brooklyn Nets have remained healthy favorites to land the NBA title this time around, with the Los Angeles Lakers creeping up in recent weeks due to some stellar trades. However, there is the not-so-small issue of how things will fare for Steve Nash’s side if the media circus around Kyrie Irving doesn’t subside any time soon.

For those of you who may have been living under a stone for the past few weeks, let’s recap the situation that’s unfolding. 29-year-old Nets star Irving, set to start his third season at the Barclays Center, refuses to get vaccinated against the COVID-19 virus.

In doing so, he’s set to miss all the home games that Brooklyn undertakes this season, as well as those that take place in New York and California. Essentially his stance means he’ll miss more than half of the regular season games and won’t be paid while doing so. This will undoubtedly affect the Nets and, as such, should factor into your sports betting strategy. Additionally, as can be seen at www.sidelines.io, it is sure to impact on the odds placed on Brooklyn to win the NBA title that many have predicted is theirs to lose.

There’s been a groundswell of opinion against Irving’s stance, which has been fueled by conspiracy theories he’s echoed on social media. While some have railed against the stand the NBA has made against those who have not been vaccinated, most side with the league, including stars both past and present.

Related  Top Benefits of Being in NBA

“I’m totally in unison with the league, I’m a firm believer in science, and I’m going to stick with that, and hopefully everybody abides by whatever the league sets the rules. I think once everybody buys in, we’re going to be fine.”

Another legend, Kareem Abdul-Jabbar, has been even more forceful in his position on this matter;

“The NBA should insist that all players and staff are vaccinated or remove them from the team. There is no room for players who are willing to risk the health and lives of their teammates, the staff, and the fans simply because they are unable to grasp the seriousness of the situation or do the necessary research.”

Irving continues to stand by his position, and in doing so, risks being consigned to the sidelines for the entire season, with the Nets unlikely to allow him to be part of their set-up given his unvaccinated status.

On his stance, Irving has recently stated;

The Nets start their NBA season with a trip to Milwaukee to face the reigning NBA champions on October 19th, and at present, they’ll more than likely do so without Irving, even though he would be cleared to take part in that fixture.