Who is Kepa Arrizabalaga?

Kepa Arrizabalaga is a Spanish football player who plays for Premier League club Chelsea FC and Spain National team as a goalkeeper.

In January 2013, he made his debut for the B-side where he kept clean-sheet in a 1-0 win over UD Logrones. On January 5, 2015, he was loaned to SD Ponferradina and made his professional debut against Racing de Santander.

Six months later, Arrizabalaga moved to Real Valladoid in a season loan deal. After returning to Athletic Bilbao in 2016, he was included in the first team as a regular starter. He made his debut on September 11, 2016, in a 1-0 win against Deportivo de La Coruna.

Kepa was one of the hottest goalkeepers in 2018. He was linked with top clubs like Real Madrid and Liverpool but Chelsea signed him on £71.6 million making him the world’s most expensive goalkeeper. He moved to Chelsea on a seven-year contract.

Other than that, he has also represented his national side. He was the part of Spain U18, U19, U21 team. He was also named in Spain’s 23 man squad for the 2018 FIFA World Cup in Russia. 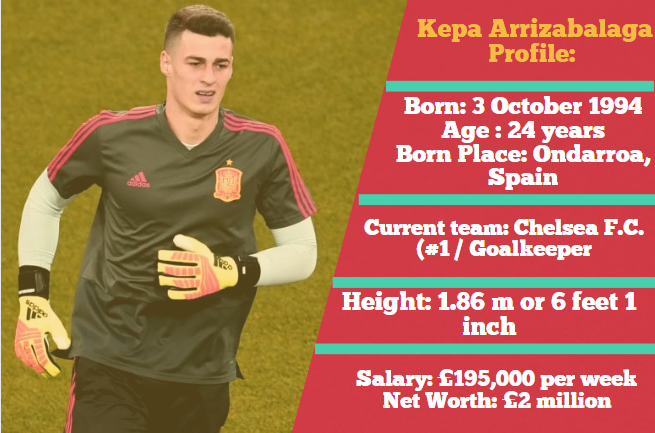 His height compared to other goalkeepers

Kepa Arrizabalaga net worth and salary

Kepa’s net worth currently is estimated to be £2 million but that will increase enormously in the coming years considering the contract he has with Chelsea.