Who is Tony Kemp?

Anthony Allen Kemp professionally known as Tony Kemp is an American professional baseball second baseman and outfielder who currently plays for the Houston Astros of the Major League Baseball.

He was named SEC Freshman of the Year and First Team All-SEC in 2011. In 2013, he was named an All-American and the Southeastern Conference Baseball player of the Year. Due to his impressive college career, he was selected in the fifth round of 2013 MLB draft by Houston Astros.

He started playing with the Corpus Christi Hooks of the Class AA Texas League in 2015. He received a promotion to the Fresno Grizzlies of the Class AAA Pacific Coast League and was selected in the 2015 All-Star Futures Game.

On May 1, 2017, Tony came back to Astros. In 17 games with the Astros, he had a .216 average and 4 RBI. The Astros won the 2017 World Series and although he did not participate in any playoff matches, he was still on the 40 man roster and won his first championship title. 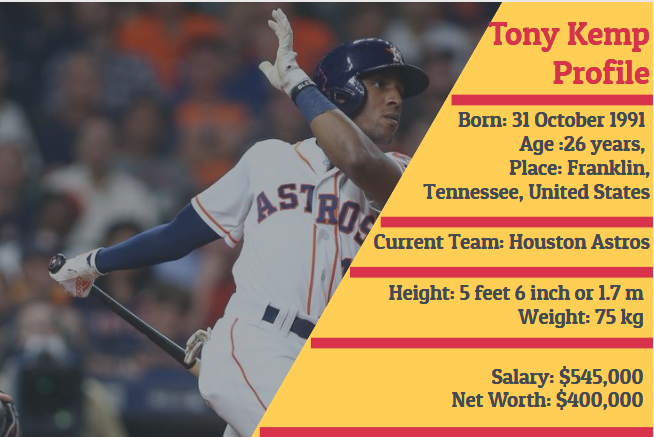 Tony Kemp Net Worth and Salary