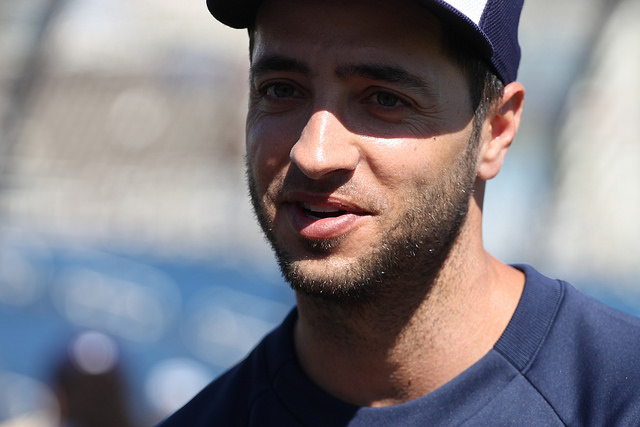 Who is Ryan Braun?

Ryan Braun is an American baseball left fielder and first baseman who plays for the Milwaukee Brewers of the Major League Baseball. He has been with Brewers since 2007.

Born on November 17, 1983, in Los Angeles, California, Ryan attended Granada Hills High School. He was a three-year team captain and Most Valuable Player. From an early age he was a top prospect as he was rated the sixth-best shortstop in the country by Team One Baseball, and among the top 100 overall prospects by Baseball America.

Ryan was offered a scholarship from Stanford University and the University of California, Berkeley but he decided to attend the University of Miami on an academic scholarship, due to his excellent high school grades. During his time there, he was named ‘National Freshman of the Year’ and first-team ‘Freshman All-American’ by Baseball America in 2003.

Braun was then selected in the first round by Milwaukee Brewers in the 2005 MLB draft. In 2006, he became the team’s Minor League Player of the Year. The next year, he was named NL Rookie of the Year and some sportswriters called it one of the most dominant rookie seasons in baseball history.

For the consecutive five years from 2008 to 2012, he was awarded Silver Slugger awards and also won the NL Most Valuable Player Award in 2011.  Braun was also named to five straight All-Star games. In 2012, he became third among all active ballplayers in career slugging percentage and first among active left fielders in career fielding percentage. Braun’s career with Brewers has been a remarkable one and he is truly considered as one of the all-time greatest.

In 2011, he came under fire for a testosterone test which he failed. He also had a connection to the Biogenesis of America clinic which provided performance-enhancing drugs to baseball players. Due to that, he was suspended without pay for the remainder of the 2013 season and playoffs.

Ryan Braun has earned $155,817,500 so far in 12 seasons with Milwaukee Brewers. Celebrity net worth reveals his net worth to be only $8 million but considering the career he has and earnings, we can surely say that Ryan Braun net worth lies in the range from $60 million to $90 million.