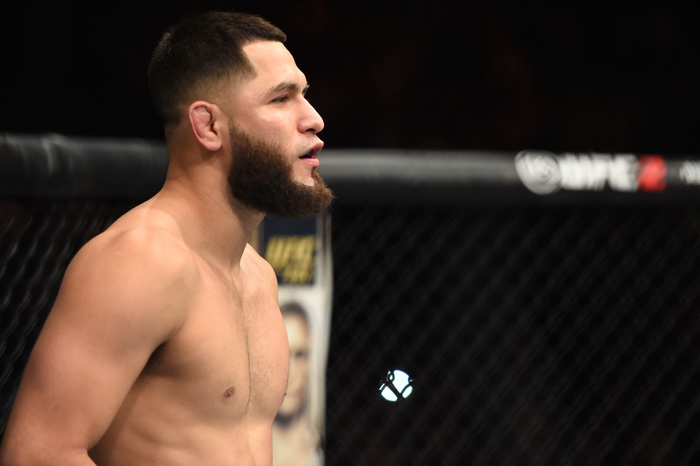 Jorge Masvidal is an American MMA fighter who competes in the UFC’s welterweight division. He is ranked No. 4 in the official UFC Welterweight rankings.

Masvidal was born on November 12, 1984, in Miami, Florida, to a Cuban father and Peruvian mother. He had an interest in fighting from an early age and was often involved in street brawling from time to time. He later competed in wrestling at St. Brendan High School but failed to stay at school because of his grades, and then began training mixed martial arts.

Masvidal has been on the fighting scene since 2003. His kickboxing debut came on April 11, 2003, at Fast and Fearless event. In 2009 he was signed by Bellator and entered their Lightweight Tournament. A year later, he was moved up to the welterweight division.

In early 2011, he returned back to Strikeforce and was signed by UFC in January of 2013. His debut at UFC came on April 20, 2013, against Tim Means where he won via unanimous decision.

His second fight was against Reza Madadi on July 27, 2013. He won the fight via submission. For his third UFC bout, he faced Rustam Khabilov. He lost the match via unanimous decision. Even though he lost the match he did earn his first Fight of the Night bonus honors.

After his first loss at UFC, he then went on to win three fights against Pat Healey, Daron Cruickshank, and James Krause. His second loss at the UFC came on April 4, 2015, against Al Iaquinta in a split decision.

On January 28, 2017, he faced Donald Cerrone and finished the fight via TKO in the second round. The win also earned his second Performance of the Night bonus. He then lost his back to back fights against Demian Maia and Stephen Thompson. Masvidal is expected to fight Ben Askren on July 6, 2019, at UFC 239.

Does he have a wife?

Jorge is not married. He might be possibly single and is focusing much on his fighting career. He has two daughters and a son with his ex-partner Iman Kawa. Iman and Jorge were together for more than 10 years. His son is two years old while his daughters are 9 and 15 years old.