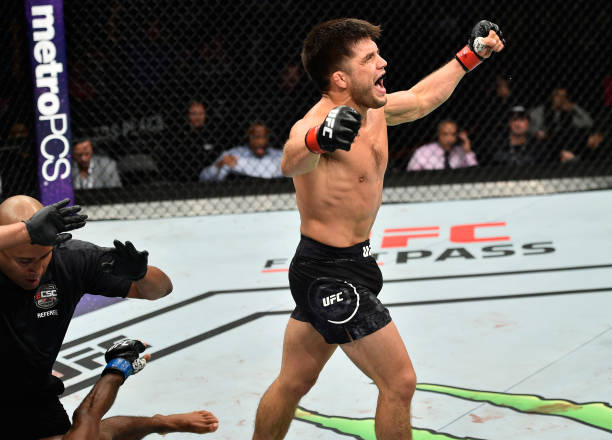 Henry Cejudo is an American mixed martial artist who is currently associated with the Ultimate Fighting Championship(UFC). It’s safe to say that he is at a peak stage in his career being the current champion in the Flyweight division. As of 2019, he boasts of being 5th in terms of the UFC pound for pound rankings.

Cejudo was born on February 9, 1987, in Mexico City, Mexico. Cejudo had a lot of struggle when he was a child as there were seven children who were raised by a single mother. His father caused a lot of havoc in the family, being an alcoholic and a drug addict.

Moreover, his parent’s didn’t have any official documentation of immigrants and as a result, it’s said that he had to move nearly fifty times between California, New Mexico, and Arizona.

During his high school days, Cejudo started to show his prominence as a freestyler winning the American wrestling federation’s national freestyle tournament at the most elite level. This would open up a new world for him with several opportunities being unleashed through this victory. For one, he would start training full-time at the United States Olympic Training Center. He would sharpen his skills for many years.

This would become great preparation for going into different competitions. Eventually, 2008 would be a very big year for Cejudo’s life as he would go on to win the gold medal at the 2008 Summer Olympics in Beijing. He would make history by becoming the youngest Mexican-American to ever become an Olympic champion in freestyle wrestling.

However, after this high in terms of his career, his association with freestyle wrestling slowly started to lose its grip for reasons that Cejudo has not made public. After a sabbatical from the sport, in 2013, Cejudo started his transition towards MMA. His debut would come at the World Fighting Federation that same year where he defeated Michael Poe by TKO due to punches in his MMA debut.

The very next year, he signed with the UFC and started his journey through his start was tough as his first fight was canceled because of medical reasons. Today, he has made a name in the flyweight division and recently also signed a new six-fight contract with UFC. A career high in the UFC has also been the 30-second knockout that he was able to perform to TJ Dillashaw that made headlines all around the world.

Henry Cejudo’s net worth is estimated to be $1 million. Coming from such humble backgrounds, Cejudo has a story of rags to riches. With his name rising and the cards getting better and better with every fight, his net worth might soon multiply in the near future.

The name he is starting to make has also made him noticed among some big brands that might be interested in some juicy endorsement deals.

Cejudo was actually known for being fully focused towards his craft but in recent days, it looks like he is open for relationships as well.

Related  Max Holloway Net Worth & How He Makes Money

Apparently, Cejudo once was seated together with the Bella twins in a first class seat. Here, Cejudo started a conversation with Nikki Bella, who was formerly dating WWE superstar John Cena. Cejudo has publicly declared his interest in Nikki Bella and Bella has responded positively as well on Twitter saying she would be open to him helping her out in a workout.