Home Golf Tom Watson Net Worth- How Much is the Golfer Worth? 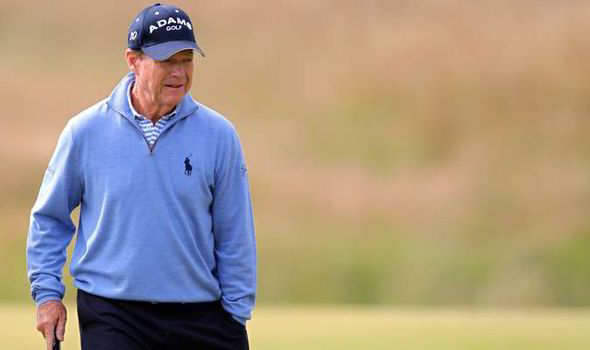 Thomas Sturges Watson, who is better known as Tom Watson, is a well-known American professional golfer on the PGA Tour. He is known for his longevity having started a long time back and still being active in the golf course. McCormack’s World Golf Ranking indicate that he was the number one player in the world from 1978 until 1982, which is a very big achievement.

He was born on September 4, 1949, in Kansas City, Missouri. Tom is grateful to his father Ray, who was the one who had brought him into the game of golf.

He studied at The Pembroke-Country Day School where he made a name for himself in the high school scenario. Later on, Watson impressively won Watson won four Missouri State Amateur championships, 1967, 1968, 1970, and 1971.

Heading to his college days with some great accomplishments backing it up, he would study at Stanford University where his focus was again on golf. Eventually, he graduated from there with a degree in psychology in 1971.

That same year he joined the PGA Tour for the first time. Watson found a great cabbie in Bruce Edwards at a tournament that would turn into a great partnership for many years yielding in a great performance on the golf course. He came across as a winner to many with one tournament win after another.

By 1977, he had already won his second major championship. During the 1970s, there were many instances when he came close to winning but ended up second. The Players Championship in 1979 is one of those situations.

Related  Justin Harding Net Worth- How Much is the Golfer Worth?

Soon, the turn of the ’70s to the ’80s would be a good change for Watson as in 1980, he was the leading money winner on the PGA Tour for the fourth consecutive year, winning six tournaments in America. He cited that consistency and dedication were the two main reasons for his success.

He demonstrated remarkable consistency by making at least one PGA Tour cut per year from 1971–2007, a streak of 37 years. He is also the only record holder for having at least one round of 67 or less in any of the four majors in five different decades.

Tom Watson has been considered to be an elite in the game of golf alongside the names of Gene Sarazen, Ben Hogan, Jack Nicklaus, and Tiger Woods. He has also contributed to his nation, the U.S.A. by competing in four Ryder Cups as well as being the captain of their side.

Over a span of such a long career, Tom Watson has made a fortune from doing what he loves to do. Currently, Tom Watson net worth is estimated to be $25 million. He boasts of a career where he has won eight major championships and headed the PGA Tour money list five times.

Tom is married to Hilary Watson. They are currently going through a hard phase as Hilary has sadly been diagnosed with pancreatic cancer. Tom and Hilary have two children together Michael Watson, Meg Watson