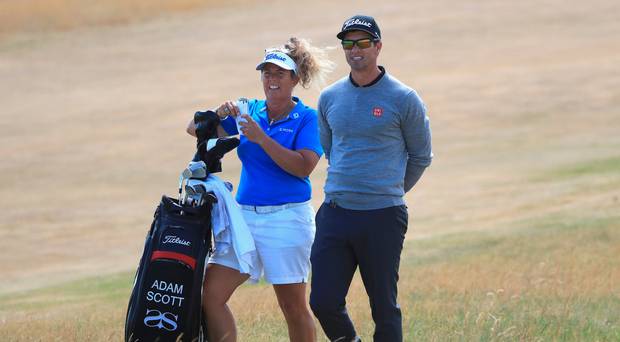 Sunesson was born in 1967 in Kaslshamn, Sweden into a golfing family. At the age of 15, she played golf at amateur standard and decided to go on the tour by persuading Jaime Gonzalez to let her caddie for him in 1986. She also caddied for Howard Clark during the mid 1980s before Nick Faldo asked her to join his team in 1990.

Fanny and Faldo’s partnership lasted for almost a decade. With Faldo, they won 2 Masters Tournament. Their first Masters title came in 1990 while their second title came in 1996. Over a nine year period, their pairing won four major trophies. In 1999, she decided to leave Faldo in-order to caddie for Sergio Gacia. However, their partnership was short lived lasting just eight tournaments. She also had some time together with Fred Funk and Notah Begay III before being rehired by Nick Faldo.

Sunesson retired in 2012 from full-time caddying to shift her focus towards coaching but she came out of her retirement I n2018 to team up with Adam Scott. She is now teaming up with her fellow Swede Henrik Stenson at the 2019 Masters Tournament.

So far in her illustrious career, she has established herself as one of the best caddie ever. She is also the most accomplished female caddie in the history of men’s golf having been there on the field for almost two decades. As a caddie, she has won four majors, multiple Ryder Cups and a Players Championship.