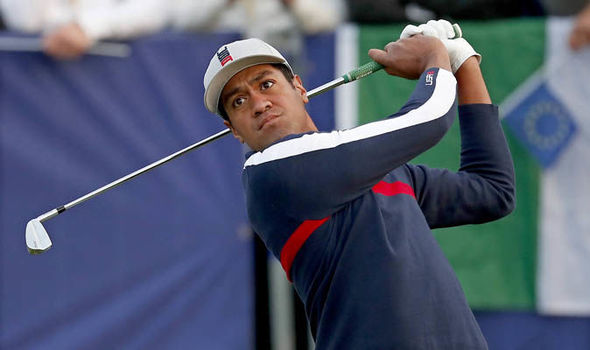 Milton Pouha Finau commonly known as Tony Finau is an American golfer who currently plays on the PGA Tour.

As an amateur he won the Utah State Amateur Championship in 2006, defeating Daniel Summerhays in the 36-hole championship match. He received several college scholarships offers in basketball but decided to stay in golf instead.

Finau turned pro at the age of 17 and began playing on mini-tours including the Gateway Tour, NGA Hooters Tour, and National Pro Tour. In 2013, he played on the PGA Tour Canada followed by Web.com tour.

Finau’s first title came in August 2014 at the Stonebrae Classic. He then finished 12th in the Web.com Tour to earn his PGA Tour card for the 2014-15 season. Finau won his first title on the PGA Tour at the Puerto Rico Open and with that win, he moved into the top 25 in the FedEx Cup standings.

Instead of defending his Puerto Rico title in 2017, he decided to take his chance to get into the field at 2017 WGC-Dell Technologies Match Play. In 2018, he qualified for three majors including his first Master’s appearance. In June 2018, he finished in 5th place at the U.S. Open, his highest finish in a major tournament so far.

Finau is actually a tall player. He stands 6 feet 4 inch or 1.93 m tall making him several inches taller than the height of an average golfer. He weighs 91 kg or 200 pounds maintaining his perfect height/weight ratio.

His wife Alayna is seen at tournaments cheering up for her husband. We don’t have an exact date when they got married but the couple has four children together named Jraice, Leilene, Tony, and Sage.

Finau and his wife both run the Tony Finau Foundation, an organization empowering youth and their families in the local community. The couple is also the members of the Mormon Church of Latter Day Saints.