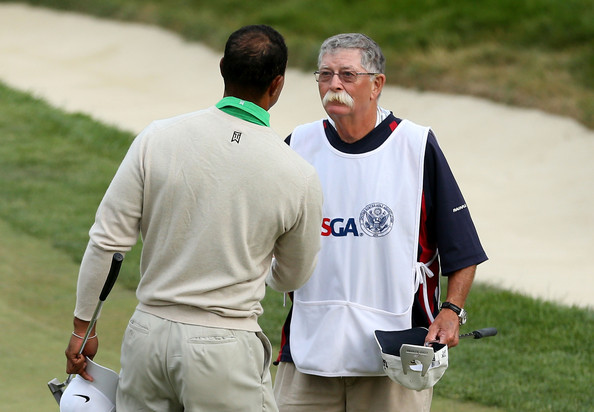 Who is Michael Cowan?

Michael Thomas Cowan also known as Fluff Cowan is a professional golf caddie on the PGA Tour. Mike has caddied for the players like Ed Sabo, Peter Jacobsen, Tiger Woods, and Jim Furyk.

Mike was born in 1948 in Winslow, Maine and is currently 71 years of age. He went to Lawrence High School and then graduated from William Penn University. He was an assistant pro at a country club in Maine prior to becoming a caddie. He was also inducted in the Maine Golf Hall of Fame in 2005.

Cowan’s career started in 1976 when he worked with Ed Sabo for two years. He then worked for Jacobsen from 1978 to 1996 for over 18 years. But his public profile got worldwide recognition after he partnered with emerging superstar Tiger Woods at that time. Their first tournament was Tiger Woods’ professional debut at the Greater Milwaukee Open in 1996. In 1997, Tiger Woods bag his first major titles at Masters Tournament, their only major victory working together.

In 1999 after Nissan Open, Cowan was fired by Woods for undisclosed reasons and was replaced by Steve Williams. According to some sources, he was fired by Woods because of a 1999 Golf Magazine interview where he revealed his salary ($1,000 a week and 10% bonuses of Wood’s winnings). But despite his dismissal, they are close friends.

After parting ways with Woods, he began working with Jim Furyk. Cowan was Furyk’s caddie when he won his 2003 U.S. Open. Other than that, he has caddied Michelle Wie for one tournament while Furyk was off due to injury.

Related  Corey Conners Net Worth & How He Makes Money

Who is Mike Cowan’s wife?

Mike Cowan is married to Jennifer Cowan. We don’t have an exact date when they got married. With his wife Jennifer, they have a son named Bonnie. Together they reside in a nearby Rockville in Maryland.