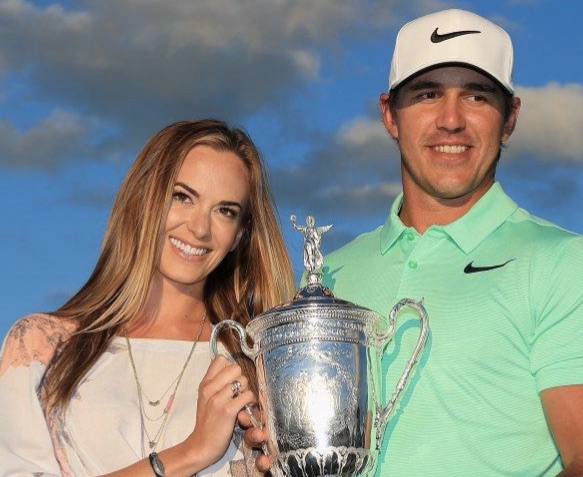 Jena Sims is the hot girlfriend of the professional golfer Brooks Koepka. The duo started dating since 2017 and their relationship has created a lot of attention in the golfing world. Let’s check out who Jena Sims really is.

Jena Michelle Sims was born on December 30, 1988, in Winder, Georgia. She graduated from Winder-Barrow High School in 2007 and then studied International Business at Belmont University in Nashville. However, she did not continue her study and left her college to move to Hollywood to start her modeling and acting career.

Jena Sims acting career started in 2010 appearing in TV series True Jackson and CSI. Her first lead role came in 2012 in comedy horror “Attack of the 50 Foot Cheerleader”. Apart from that, she has starred in movie “Las Vegas” which also starred some of the biggest names in Hollywood like Michael Douglas, Robert De Niro, and Morgan Freeman.

Koepka’s girlfriend has also appeared on TV series like Entourage, Dexter, The Vampire Diaries, CSI, and One Tree Hill. Furthermore, she has also done movies like Kill The Messenger, Sharknado, Beneath the Leaves, Fallen Angel and Sharknado 5.

The actress also runs the non-profit “Pageant of Hope” that hosts beauty pageants for children and teenagers who face various disadvantages in their lives. Some of the places where pageants have been held are Winder, Tennessee, New York, Michigan, Wisconsin, and California.

She has been awarded several accolades and honors including the Southern Hero Award, the Prudential Spirit of Community Award, and an award from the Caring Institute in Washington DC.

Although she has established her name by herself doing some charitable works and appearing in movies and TV shows, she is remembered mostly as the girlfriend of professional golfer Brooks Koepka. The two have been dating since 2017 and are enjoying their dating life more than ever. She is seen supporting her boyfriend when he is playing golf.

Prior to their relationship, Koepka was dating professional soccer player Becky Edwards. She played in the National Women’s Soccer League and currently plays in a Swedish club.