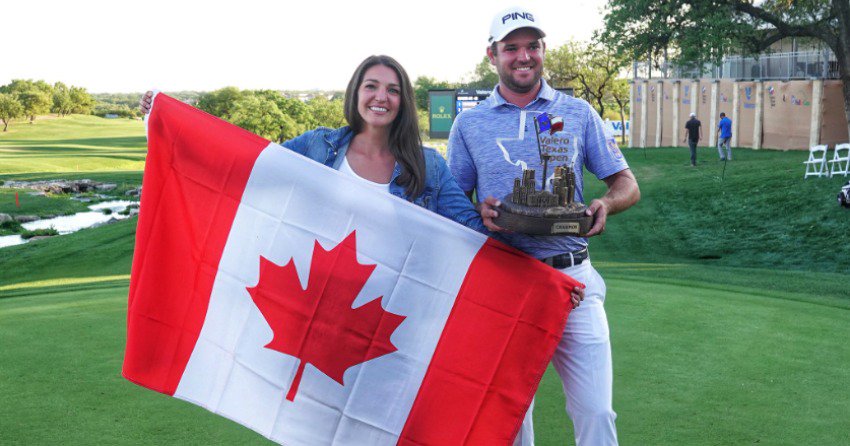 Malory Conners is the lovely wife of professional golfer Corey Conners. She stole the show at the Valero Texas Open after her husband Corey won the Texas Open with a final score on 20 under par. Her reaction was priceless.

Malory’s husband Corey just made history by winning the Valero Texas Open where he earned himself an invitation to compete in one of golf’s most prestigious tournament, the Masters.

Corey born on Ontario, Canada has played on PGA Tour Canada, PGA Tour Latinoamerica, and other tournaments. He won the 2010 Ontario Amateur and was runner up at the 2014 U.S. Amateur. He turned professional in 2015 and played in the RBC Canadian Open in 2016.

Corey and Malory’s recent journey in Valero Texas Open went to Sunday’s final round. She was watching nervously. In one clip she is watching Corey trying to sink a birdie with a cup of wine in one hand. In the next clip, she is without her wine and is in shocked disbelief as her husband makes another birdie. You can watch her reaction here.

When your wife’s watching you try to get your first PGA TOUR win …#LiveUnderPar pic.twitter.com/recy5nSRal

Another birdie.
Another hole closer to his first win on TOUR.
Another priceless reaction from the Mrs. #LiveUnderPar pic.twitter.com/bsB1Ei5PEH

O Canada! 🇨🇦🏆@CoreConn‘s crazy round ends with a victory.

Regarding her personal life, very little information is known to us but what we know is that she was also born in Ontario and they married recently in October 2018. The newlyweds are off to a great start and she might be lucky for her husband too.