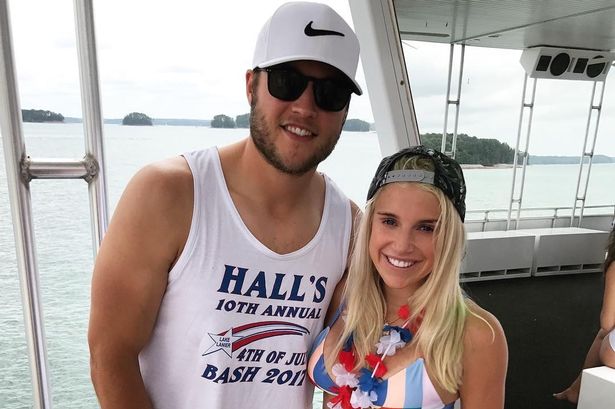 Kelly Hall is the lovely wife of NFL player Matthew Stafford. The duo got married in 2015 after dating for a good while, and the ceremony was held in Atlanta.

Kelly Hall was born on May 29, 1989, in Georgia, Atlanta to Jack Hall and Leslie Hall. She also has one sister named Jennifer Hall and a brother Chad Hall who is also a football player. Chad played with San Francisco 49ers and Kansas City Chiefs. Kelly is the youngest among the three.

Kelly is married to NFL star Matthew Stafford. They met at the University of Georgia when Matthew was in the football team and Kelly was a cheerleader. They got engaged in 2014. Prior to that, they dated for 8 years. The couple posted pictures of themselves celebrating their engagement at Cold Stone Creamery, with Kelly showing off her colossal engagement ring.

Kelly and Matthew tied the knot on April 4, 2015, in a lavish ceremony in front of her friends and family. All of the guests attending their wedding ceremony received a pair of Nike shoes and neon tucker hats.

The couple announced they were expecting identical twin girls in November 2016. The twin girls named Sawyer Stafford and Chandler Stafford were born in March 2017. Their third daughter was born in 2018.

Kelly is active on social media posting pictures of her husband and kids. Her Instagram account has more than 175K followers.

Recently on April 3, 2018, Kelly posted on Instagram asking for prayers, revealing that she is planning to undergo surgery for a diagnosed brain tumor.