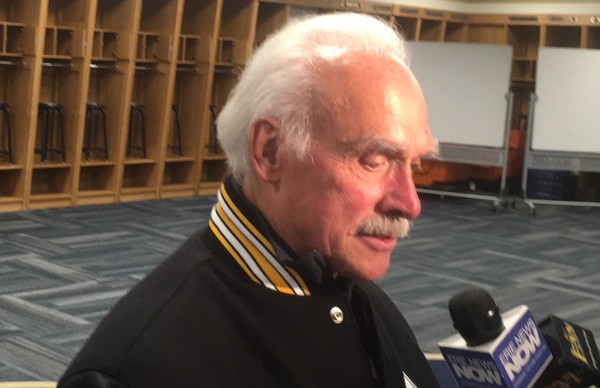 Robert Patrick Bleier shortly known as Rocky Bleier is an American former football player. He played for Pittsburgh Steelers in 1968 and from 1970 to 1980 during his time at NFL. As of 2019, Rocky Bleier net worth is estimated to be $4 million.

Rocky was born on March 5, 1946, in Appleton, Wisconsin as the oldest of four children of Bob and Ellen Belier. He had an interest in sports from an early age. He went to Xavier High School where he started to play football and basketball. In football, he was a three-time all-state selection as running back and won all-conference honors at both linebacker and defensive back.

Bleier then went on to play college football at the University of Notre Dame in Indiana. He graduated in 1968 with a degree in business management. As a junior, he helped his team to win the national championship.

Rocky was selected in the 16th round of the 1968 NFL/AFL Draft by the Pittsburg Steelers. The same year, he was drafted into the U.S. Army during the Vietnam War. He volunteered for duty in South Vietnam. On August 20, 1968, while on patrol in Hiep Duc, he was wounded in the left thigh by a bullet when his platoon was ambushed in a rice paddy. He also lost a part of his right foot in the blast as well. For his bravery, he was later awarded the Bronze Star and Purple Heart.

Bleier rejoined Pittsburg Steelers in 1970. He was put on injured reserve for the season but one year later he played on special teams. He worked hard to get the playing time and eventually on 1974, he earned a spot in the Steelers’ starting lineup.

In 1976, Bleier and his teammate Franco Harris rushed for over 1,000 yards, making this the second NFL team to accomplish this feat after Mercury Morris and Larry Csonka of the 1972 Miami Dolphins. He is a four-time Super Bowl champion. In 1980, Bleier retired with 3,865 rushing yards, 136 receptions for 1,294 yards, and 25 touchdowns. He was the Steelers’ fourth all-time leading rusher at that time.

Regarding his personal life, he is married twice. He first married Aleta Giacobine Whitaker whom he divorced in October 1996. Together, they have two children. He also has two adopted children with his second wife, Jan Gyurina.